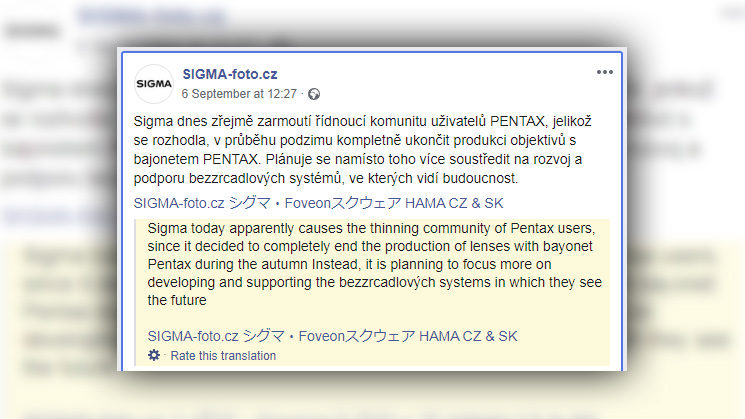 Well, this is bad news for Pentax shooters. Sigma had already stopped creating Pentax versions of their newer Art, Sports and Contemporary series lenses, but was continuing to make the ones that had already been developed. Now, though, it seems they’ve finally ditched production of K-mount lenses completely, including the older ones.

According to a statement posted on the Czech Sigma Facebook page, the reason is to be able to focus on mirrorless systems, which is where Sigma sees the future of photography heading.

Facebook’s translation system hasn’t heard of the word “mirrorless” yet, although Google seems to do a slightly better job. While Google uses the term “mirror-free” rather than “mirrorless”, it’s pretty obvious what they mean.

Today, Sigma is likely to grieve the thinning PENTAX user community by deciding to completely stop producing PENTAX lens mounts this fall. Instead, it plans to focus more on developing and supporting mirror-free systems in which they see the future.

It’s going to be a hard blow to Pentax shooters going forward. Just as they thought they were starting to get a bit ahead after seeing support from Godox on the lighting front last year, now their lens options are cut even lower than they already were.

With Tamron and Tokina essentially out of the picture, as far as K-Mount lenses go, their only real option now is genuine Pentax lenses. Well, I suppose, technically, that means Pentax users do still have the option of Tamron lenses, although they’ve got the Pentax name stamped on them and they cost twice as much as the Tamron versions for Nikon and Canon.

But, if you are a Pentax photographer, and you’ve been eyeing up a Sigma K-mount lens, then now would be the time to buy out of what’s left of the available stock. Because that’s your lot, and once it’s gone, there won’t be any more.