Hey guys, this is Von Wong, Montreal Based Conceptual Photographer. I recently did a Tango themed photoshoot around the Old Port here in Montreal. Udi thought it would be interesting to provide a little more detail than in the actual Behind the Scenes video developing a little more into specific shots, lighting techniques and the dynamics of doing an unplanned photoshoot with a small team so…hope you guys enjoy!

Final images and a BTS breakdown by Ben after the jump

Unplanned photoshoots work very well when you’re in an exciting environment. The only weapon you really need is an open mind and a little bit of imagination. Accepting input from those that you’re working with is also extremely helpful. If inspiration runs short, turn to your models and ask them : “So, what do you guys think would look good?”

When shooting in a public environment, especially without permission from the city, you want to always make sure that you don’t create too much of a scene for too long of a period. This means that mobility is extremely important… Setups had to be done fast and efficiently and having complex light setups were not quite recommended. The solution was to have a whole bunch of helpers with specific roles each and to stay reasonably lightweight. The formula of having each person with a single dedicated task seemed to work very well for me – 2 voice activated light stands with one stand/flash/modifier combination each, 2 videographers each with their own video gear, 1 BTS photographer, dancers and their assistant (to help carry clothing, changes, and misc.) That is a large entourage, but if you skip the videos it is only me and two assistants. 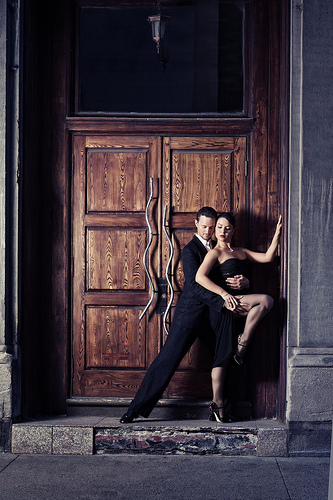 For this shoot, I decided that having two large light sources , 1 harder and the other softer would be the best option. I particularly love edge lighting but didn’t want to commit to a 2x soft box setup so I settled for having one Phottek Softlighter (Amazon | B&H) which gave me the option of having something slightly hard (when on the reflective side) and the option of having something softer (reversing it around or adding the diffuser). For flashes, I used Paul C Buff’s Einsteins in combination with the MC2/AC3 zone controller (Amazon | B&H) options to control power remotely as well as their nifty little Lithium Ion‘s that weigh only 3.5 pounds ! (please forgive the BTS shot, it was done through a mirror. Why? I have no idea 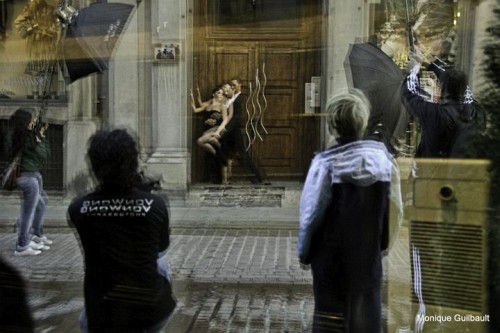 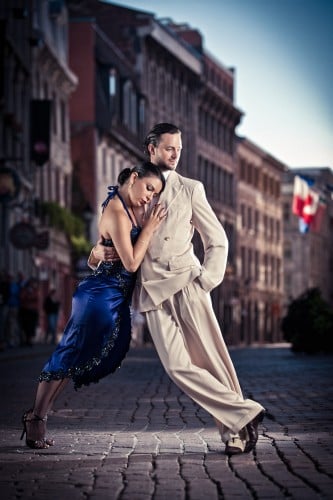 Since I wanted to create a look that was slightly different than the standard “location lighting”, I decided to use a Fader ND Mark II Variable Neutral Density filter (Amazon | B&H). This allowed me to knock down the light by up to 8 stops to be able to shoot at a wider aperture despite shooting outdoors in the daylight + studio strobes for some of my shots. The higher quality Singh-Ray equivalent filter actually costs 3x the price so for me this worked out perfectly :) It does get quite challenging to focus properly but with a little bit of practice… the results are totally worth the additional trouble! 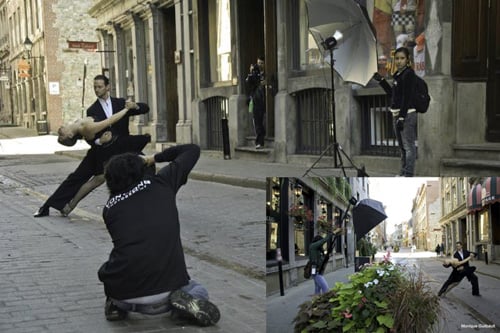 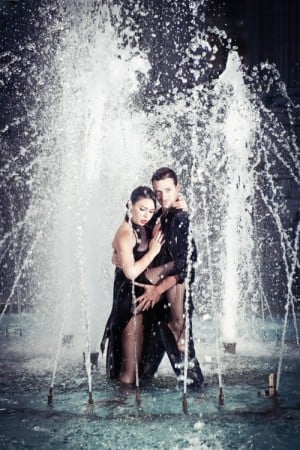 I’ve received a bunch of questions about how I managed to convince my dancers to waltz into a public fountain without permission…well, truth is … it really doesn’t take that much convincing when people expect you to do crazy things on a photoshoot. The fact that we didn’t officially have permission was not really a factor since in Montreal anyways, the penalty for going places you really aren’t supposed to is just to leave peacefully so the shot was just totally worth the risk :) 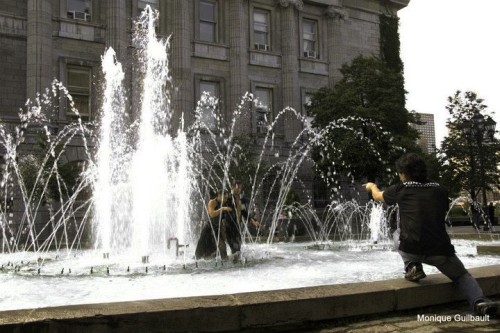 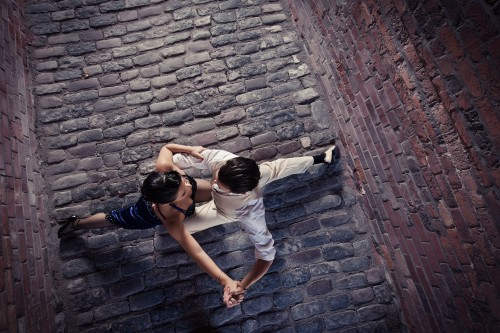 For the alleyway shot taken from overhead, I mounted my D700 (Amazon | B&H) on a Manfrotto 190 tripod (Amazon | B&H) and simply lifted it overhead to get a more interesting angle. The semi-pro and up Nikon Cameras come equipped with a nifty function called “Interval Timer” so by simply setting the camera to take a photo once every 2 seconds, I was able to make sure that I was getting the shot I was looking for. What’s neat about the “Interval Timer” is that it actually is able to focus before taking each shot so you’re sure that your subjects will be in focus. For those unlucky Canon guys out there that wish to try this trick, I believe your only option is a remote… but feel free to correct me!

After I submitted my shots to Alex & Sandra, they came back to me with : “Hey Ben, the shots are absolutely fantastic but… we think it’s missing some surreal in it which is something we really liked about your work… Do you think there’s anything to make them have a little more??” So I whipped out the photoshop brush and lit up each windowpane to create this whole surreal feeling. 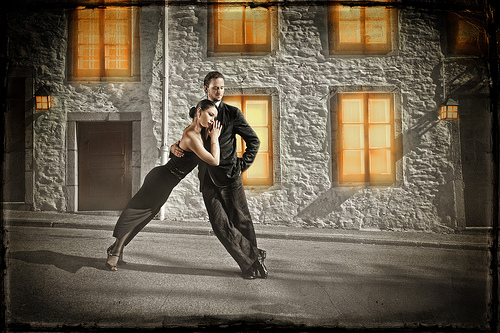 In conclusion… shooting outdoors is generally a great experience. It offers a lot of possibilities that you do not necessarily plan on and in general the people that you meet along the way are very friendly. Most people get out of the way when they see you’re doing something that seems professional and as long as you keep your models and staff happy… your shoot can’t really go wrong :)

Benjamin Von Wong is a conceptual and epic fantasy photographer based in Montreal. You Can follow his work on his Facebook page and his Flickr stream.

If you like what he does, you can read more about him in other posts.