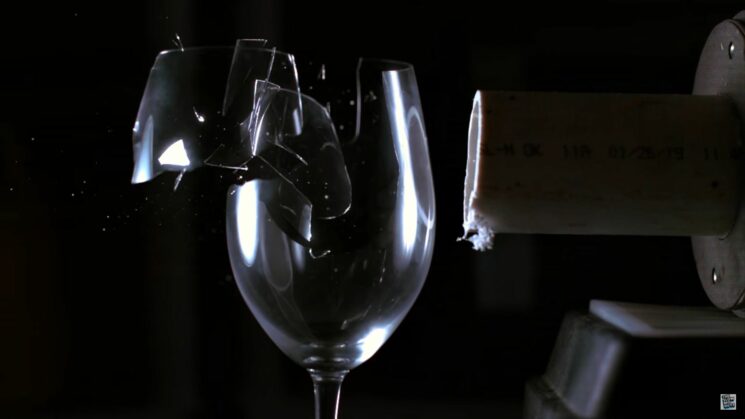 Shattering glass is one of the classic subjects to film in slow motion. But with their recent video, Gavin of the Slow Mo Guys takes it to the extreme. He plays “a wine glass’s least favorite sound,” cranks up the volume until the glass shatters, and films it all at the staggering 187,500fps.

The Slow Mo Guys did a similar experiment five years ago, shooting at 343,915fps. Apparently, this time you can see the glass breaking at a much slower pace. Precisely, “around 7500x slower than you can see with your own face,” as Gavin explains.

For this attempt, Gavin uses the Phantom TMX 7510 at 187,500fps and a few wine glasses. He backlights each of them, and adds a speaker in front of them with a piece of a PVC pipe to focus the sound on the glass. He uses a piece of paper to see when he’s approaching the right frequency. The paper vibrates when it happens so he knows that he’s getting there, and all of the glasses resonate at around 505 Hz.

One of the glasses blows out the speaker before blowing up itself. You can even see the smoke around five minutes into the video. So, Gavin replaces the coil in the speaker, and eventually, even this stubborn glass had to give in. One of the glasses is filled with water, which looks magical when it starts resonating. Gavin also moves two glasses down a bit to make the sound closer to the rim. Each time, he films the result and plays it back much slower. And even though I’ve seen glass breaking in slow motion dozens of times – it’s still fun.

The video ends when Gavin blows up the speaker again. But thankfully, he’s already captured lots of footage so there are enough fun sequences to watch.

[Shattering a Wine Glass with Sound at 187,500FPS – The Slow Mo Guys via Laughing Squid]