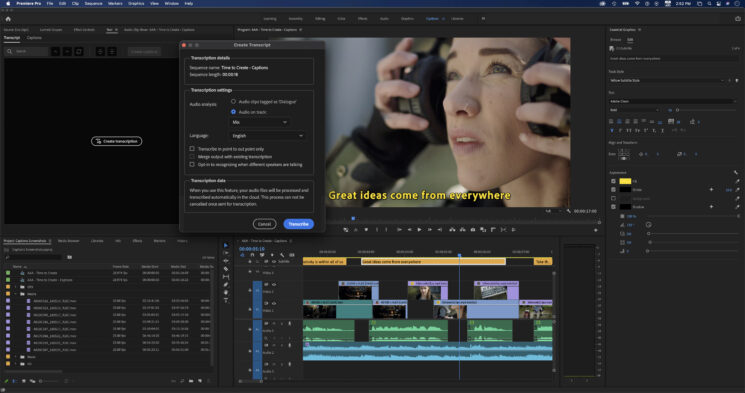 Adobe has released a new July 2021 update to Adobe Premiere Pro with two big headline features. The first is that Premiere Pro can now natively transcribe the speech in your videos to text in order to text documents for closed-caption subtitles. Previously, you’d need to purchase separate AI transcription tools like Simon Says, but now it can all be done natively within Premiere Pro itself.

The other big news from the Adobe camp is that Premiere Pro’s native Apple M1 version has now been officially released in its final form. Apple M1 support was launched as a beta in December 2020, but after seven months of testing, it’s now ready for prime time, with Adobe claiming speeds almost 80% faster than comparable Intel-based Macs.

The new feature for everybody, though, is the new Speech to Text engine that allows you to transcribe the audio in your videos, which Adobe says can result in higher discoverability in search engines as well as longer viewership. While you can create these manually, Adobe says that the Speech to Text feature can save hours on your workflow, bringing the transcription time for a five-minute video down from an average of around 70 minutes to a little over 15.

Premiere Pro’s Speech to Text includes support for 13 languages so far, with early access users apparently impressed by its accuracy, according to Adobe. The video above gives an overview of the highlights of the workflow, showing that the entire script can be easily viewed and changes made on the fly quite easily when mistakes or spelling errors need to be corrected.

They say it uses Adobe Sensei machine learning to match the pacing of human speech, and captions can be customised and embedded into the video itself or exported for upload to platforms like YouTube – which will be a big time and/or money saver for YouTube content creators. 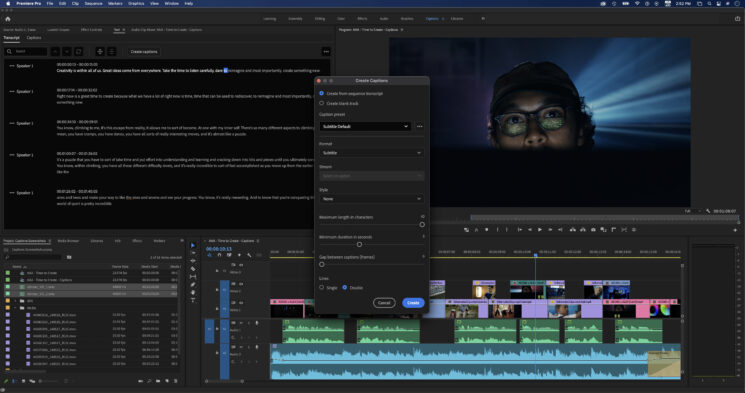 It’s a pretty cool piece of tech and while Adobe hasn’t hinted at it, it could potentially be the first step in releasing the not-as-yet-released VoCo tech shown off at AdobeMAX in 2016. While the VoCo tech was never released in its originally demonstrated form for ethical and apparent legal reasons (although there are now alternatives out there), it could prove to be very useful combined with something like the speech to text engine to help correct mispronunciations, swap out words when you say one thing but mean another – which can and does happen even with a script – or simply to help hide mid-sentence jump cuts.

Even without that ability, though, being able to automatically transcribe your video is a valuable tool. The WHO reports that over 5% of the world’s population (around 430 million people) have some kind of hearing loss and that by 2050, around 10% of people will have hearing loss issues. Even for those without hearing loss, sometimes you just want to watch a video at night without waking up the whole house.

YouTube and search engines also tend to rank videos more highly when they’re posted with closed caption titles. Many YouTubers pay a small fortune every year for somebody to perform this task for them. Now you can do it all yourself in just a few minutes. In 13 languages.

As well as the two big announcements for Premiere Pro, the new update brings a number of new features to the After Effects private and public betas. You can find out more about those as well as Premiere Pro’s M1 support and speech to text engine on the Adobe blog. The update is available to download now through the Adobe Creative Cloud desktop app.

« Shattering a wine glass at 187,500FPS using high-frequency sound
Rare footage of a glass octopus looks like a creature from another world »