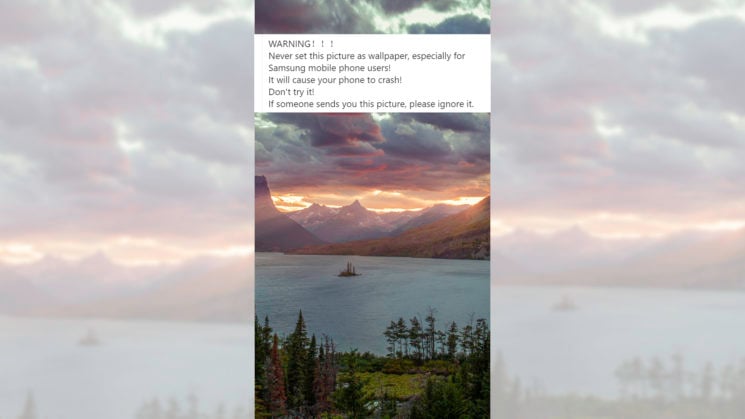 Multiple Android phone users have reported that a certain photo has been making their phone to crash. Ironically, the photo is pretty calming, featuring a lake and a sunset. But when set as a phone wallpaper, it makes it go crazy with the screen constantly turning on and off.

Ice universe tweeted the photo and warned anyone not to set it as wallpaper, especially Samsung users. According to other reports, it also affects certain Google Pixel phones, as well as OnePlus, Nokia, and Xiaomi. Note that it appears to affect phones that use Android 10.

WARNING！！！
Never set this picture as wallpaper, especially for Samsung mobile phone users!
It will cause your phone to crash!
Don't try it!
If someone sends you this picture, please ignore it. pic.twitter.com/rVbozJdhkL

“When I tried to upload the original image (left) to Weibo, I found that its color to change (right),” this user writes. “At this time, the image became harmless, but when uploaded to twitter, the original image still does not change color, still harmful.”

When I tried to upload the original image (left) to Weibo, I found that its color to change (right). At this time, the image became harmless, but when uploaded to twitter, the original image still does not change color, still harmful. So I suspect it may be related to color gamut pic.twitter.com/0A1PlUqlpv

Ice universe uploaded the original image for developers to check and warned people not to use it on their phones. Some did it after all, and well, their phones crashed. In most cases, it required factory reset to make the phone get back to normal.

Ice, whatever you do, DO NOT SET THIS AS YOUR WALLPAPER
People: sets it as their wallpaper
Their phone: dies
People pic.twitter.com/Y2Ceiv6dCW

While we were chatting about this bug, My DIYP buddy John immediately downloaded the original image and checked its color profile: 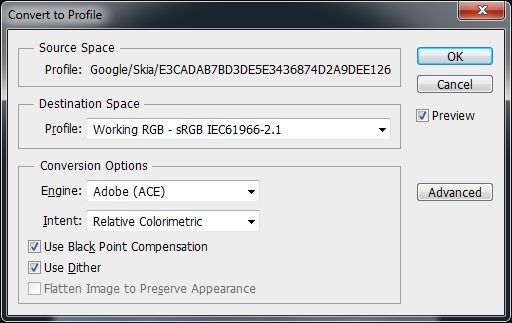 Dylan Roussel of 9to5Google shared a more elaborate explanation of this. But basically, the problem lies in the color profile.

So, while an image of a sunset on a lake is a perfect choice for a phone wallpaper – this one definitely isn’t. I don’t suggest you try it unless you have a spare phone that doesn’t contain all your important data and photos.

Update: Google appears to have an internal fix in the works after a Google rep named Wu Ahan commented on an AOSP post about the issue stating “Hi all, sincerely thanks for your contribution, we have an internal solution under review”. It is unknown when we might see the fix released, but Android Central believes it may be in the next security update coming in July.

Instagram is testing a new “Albums” feature in Android Beta