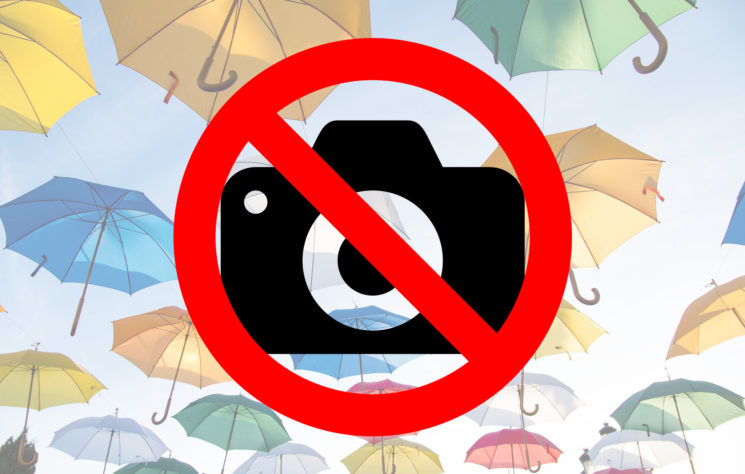 Earlier this week, 150 umbrellas were put up in Culver Square, a shopping mall in Colchester, Essex, UK. Although photos have been all over Instagram and Facebook, one photographer was recently interrupted by security staff when he pointed his camera to the umbrellas. They allegedly told him that taking photos was forbidden and that he should have permission from the management.

When you look up for #culversquare on Instagram, you’ll see over 1,000 photos with this hashtag, many of them featuring the colorful umbrellas. However, Clive Bowyer says that he had an unpleasant experience when he tried taking photos of the installation. The photographer told Gazette that he went to have a look at the umbrellas and take photos of them. When he took his camera out, someone from Culver Square management approached him and said that he wasn’t allowed to take photos. They reportedly told him that he needed to have permission from the management prior to shooting.

According to Gazette, Culver Square said that professional photographers need permission prior to shooting. The mall management reportedly added that they “have to be vigilant against ‘hostile reconnaissance’ in ‘today’s security environment.’” They also said that, although everyone is legally allowed to take photos in public, the mall is private land. However, they have reportedly apologized to Bowyer after the incident, saying that he shouldn’t have been stopped from taking photos.

As far as I know, many shopping malls don’t ban photography at all. If you’re free to enter, you’re free to shoot. However, many of them do ask for prior permission from professional photographers who want to shoot with extra gear such as lighting and/or tripods, and who bring models. This is at least what I’ve learned from stock photographers who had photoshoots at malls.

Now, there are malls where taking photos is forbidden, and it’s usually pointed out somewhere with a sign. I personally don’t know what photo policy is at Culver Square. But, if no one was stopped for taking photos with a smartphone, why was Bowyer chased away “from the private land” when he pointed a professional camera to the umbrellas? If the policy is not to take photos, then it should be the same for everyone, right?

Glow has launched a new range of windproof lighting umbrellas