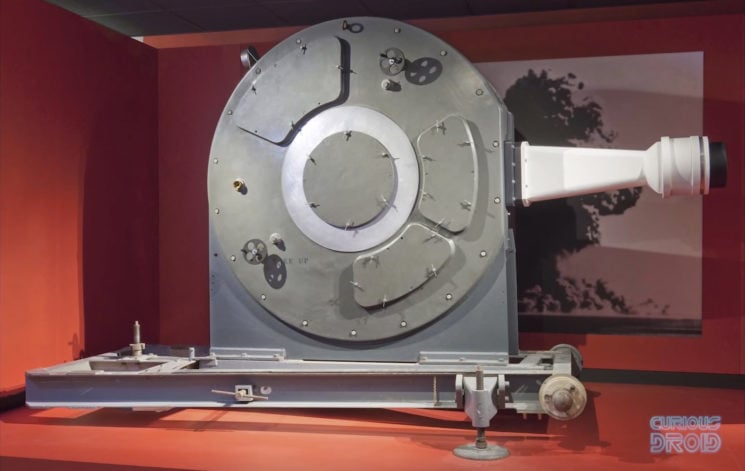 As much as I love going out and using gear and creating stuff with it, I can’t help but get excited about the geeky technical side of photography and video, too. This particular video from Curious Droid talks about ultra high speed cameras. And while the Panasonic GH5 with its 180fps 4K footage is quite impressive, we’re talking cameras that shoot millions of frames per second.

I had wondered in the past how cameras had managed to track objects in slow motion moving at or over the speed of sound. And we’ve all seen the nuclear test footage of bombs exploding in slow motion. But how did they manage this? Especially given the technology of the day? Turns out, it’s all down to mirrors.

Mirrors have been used throughout film and photographic history for this type of thing in a number of different ways.

For tracking shots like missiles to see how they fly through the air, a single camera points at a mirror. This lightweight mirror is computer controlled, allowing it to precisely track along with the moving object at a rapid pace. To try and pan something like this in real time by hand would be practically impossible.

For a start, a human wouldn’t have the speed necessary to keep up. Nor the reaction time. By the time you’d heard the boom and started to move the camera, the projectile would’ve already hit its target.

Other devices exist today which use an array of digital sensors to capture an image sequence. Again, a mirror rotates in rapid succession, cycling through each of the sensors in the system. By working in this way, you can overcome the speed bottlenecks of trying to record ridiculously high framerates on a single sensor. You just cycle through each sensor in sequence, rotating the mirror to point the shot to the correct one. By the time the last one is taking its shot, the first has cleared its buffer, starting the sequence over.

The video goes into more in-depth detail about how these cameras worked back in the film days, too. It’s well worth a watch, just for the wow factor.

Even though this kind of tech will never be applicable to the work I do, I do find this fascinating. I had no idea that mirrors have ever been so heavily involved in high speed video. But it appears that they’ve always played a hand from the very beginning through to today. The ingenuity to come up with some of these ideas 70 or more years ago is impressive and inspiring.