And so Rokinon’s Quest to dominate the prime market continues. The company released 2 news lenses today: a 50mm f/1.2 and 21mm f/1.4.

This is not a surprise as rumors about the 50mm f/1.2 have been roaming the blogosphere for a while now, but the release date has been pulled in a few days (and no, they did not kill it). Rumors or not,the pace in which Rokinon (AKA Samyang, AKA Bower, AKA Walimex) releases lenses is quite impressive.

Interestingly, the lenses are not released for Nikon mounts. Hit the jump for more specs.

So before we dive into the hard specs, there are two interesting facts about this release:

The first one (which is interesting but no so impactful) is that Rokinon is caving in colorwise and will release some of the lenses in silver: namely the lenses for Sony E, MTF, and Fujifilm X.

The other thing which is far more interesting from my perspective is that there are no Nikon lenses released. Heck, there is not even a date for them. This may indicate that developing those lenses for the Nikon 1 was not easy, but it also may be a signal on how serious Rokinon thinks Nikon are with their Mirorless market.

Both lenses are mirrorless babies, so they are small and cozy at less than 3″ long.

B&H shares a table to sum up the release: 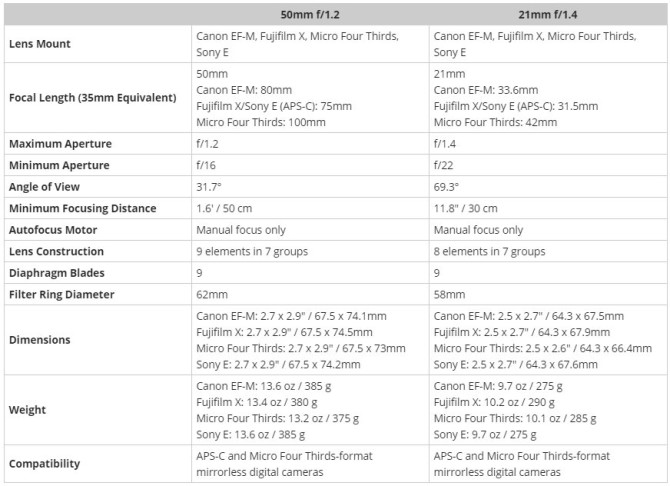 « Behind the scenes: photographing the Emmy’s
Selfie-related accident kills Japanese tourist at the Taj Mahal »