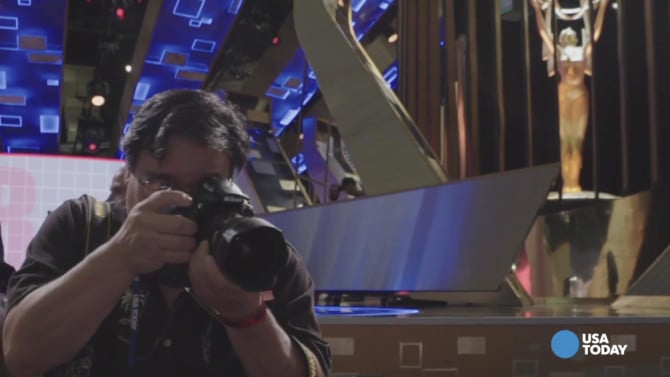 Have you ever wondered how photographers at the major awards get there photos or how they get the celebrities to look at their camera?

Ahead of the upcoming 67th annual Emmy Awards, USA Today’s Robert Hanashiro and Dan Macmedan take us behind the scenes and show us where they are seated, a bit of the equipment they use and share their challenges with us.

The video begins with Macmedan’s briefing of the red carpet shooting, where photographers are positioned about 10-15 feet away from the celebrities. Equipped with what seems to be a Canon 1D X, he explains that his aim outside is to capture the famous red carpet photos of nominees and other celebs.

“We want to see fashion, and that’s mostly what it’s all about, especially the women”, Macmedan says. “Head to toe, we want to see from the style of their hair all the way down to what kind of shoes they’re wearing”, he adds, stating that when it comes to the men it’s mostly about getting a shot of them in their fancy tuxedos.

Next Macmedan explains that other than fashion, photographer on the red carpet really want to get eye contact in their photos. “That’s what really says that they’re looking at you and you do whatever you can to get them to look at you. Yell, scream, make funny jokes. Whatever it is, what we want is eye contact”.

Once Macmedan is done on the carpet, he moves over into what’s called the “Photo Room”. That’s were award winners go after they receive the award to, you guessed it, have their photo taken.

Meanwhile, Macmedan’s colleague Robert Hanashiro is in charge of getting the shots during the show itself.

This will be Hanashiro’s 26th Emmy Awards, so he feels pretty much at home already at the Microsoft Theatre and around all the stars.

Taking viewers to his not-very-close seats, Hanashiro mentions that using long lenses in the dark theatre is one of the challenges he faces. Although he uses Nikon’s D4 and D810 with their excellent low-light capabilities, shooting a 600mm lens on a monopod is still less than convenient. Tripods are not allowed, apparently, even if you work for USA Today.

“A lot of the things I’m looking for are not necessarily on the stage but they’re in the house”, he says.

He then goes on to describe his favorite photos:

“The most important thing for me is having a nice clear shot at the reaction of the winners when they’re announced. I think that spontaneous moment of when their name is announced, “the winner is…”, and there’s like this second where everything just stops and then you get this wonderful expression on the winner’s face”.

Watch the full video below to get a BTS view of the seating arrangements, photographers’ seating and how the theatre looks before the stars arrive.

An Emmy-winning filmmaker talks about depression in the industry

« Sex offending suspects in Switzerland will have their pixelated photos published… And then unpixelated…
Rokinon Adds a 50mm f/1.2 and a 21mm f/1.4 Lenses (for all but Nikon) »