Wrapping cables is probably the biggest pain in the backside of any kind of shoot that requires them. For photographers, that often means strobe power cables or maybe sync cords if you’re not using wireless triggers. For filmmakers you’ve got power cords, audio cords, HDMI cables, and all kinds of things.

Often, we just use gaffer tape, which ends up getting thrown away and replaced on every job. Or, perhaps, we use velcro, which still needs to be replaced regularly as they usually get lost. Rip-Tie has a better way of doing things that ensures your wraps don’t get lost, and they’ll probably live longer than your cable! We stopped by the Rip-Tie stand at IBC 2019 to find out more.

Rip-Tie’s premium Rip-Lock series of cable straps might look a lot like just regular velcro at first. But the biggest advantage they offer is that they lock onto your cables. Once securely attached to your cable, they’re not letting go on their own. I’ve been using a couple of these on some cables since the show, and they really hold well.

That they lock onto your cable means that wherever your cable goes, the Rip-Tie goes, so unless you lose your cable, you’re never going to lose your wrap. The Rip-Lock cables come in a number of different lengths and a range of colours, so you can co-ordinate for different departments or owners of cable on collaborations or multi-person jobs.

Of course, these things are going to last a while. And your cable might die before the Rip-Tie becomes useless. So, each pack comes with a “key” allowing you remove them from your cable so that you can attach them to another if required. 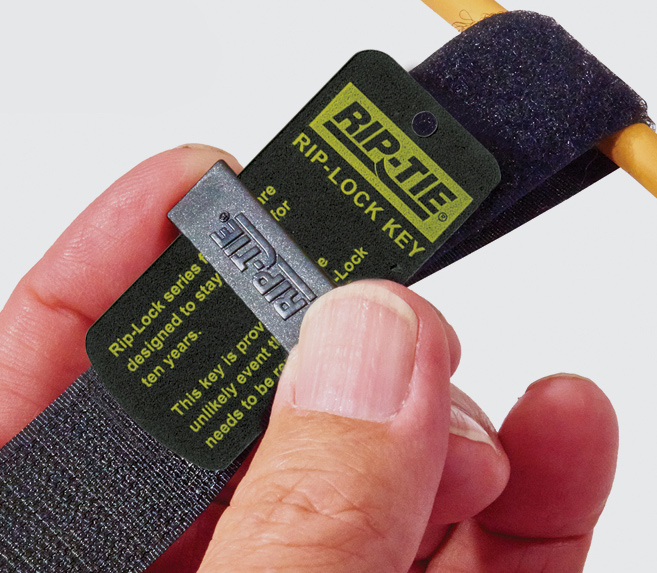 These aren’t the only products Rip-Tie makes. They also have an alternative to gaffer tape that works extremely well and has a lot of holding power. It’s called RipWrap, and you can see this in the photo at the top of this page just how strong it is as Udi and I try to pull two pieces apart.

It works on a similar principle to velcro, however, it’s as thin as gaffer tape but without any kind of adhesive, so no sticky residue. Sure, there’s no residue on quality gaffer tape, either, but there’s a lot of crap gaffer tape out there, and RipWrap only sticks to itself. The hold on this stuff is extremely strong, and I wish I had some kind of force gauge that would let me properly test its limits. It’s made from a Polyester/Polyethylene blend, and despite its strength, it’s very light and flexible.

Rip-Tie has a whole range of products, available in various sizes, lengths and colours, and you can see and buy them all here. Or, you can find out more on their website.

Quick tip: Why you need bricks covered with gaffer tape in your studio