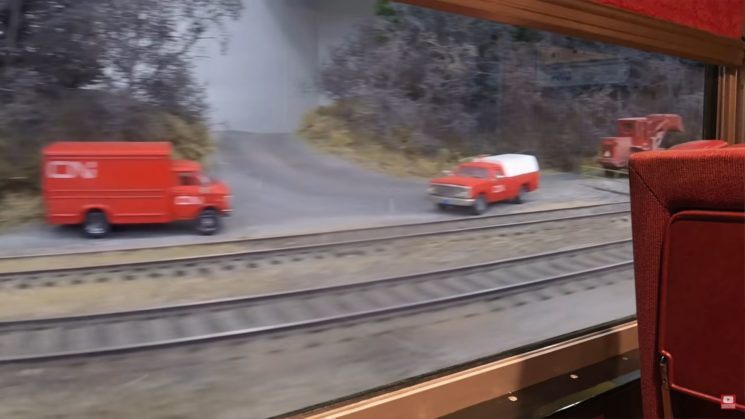 My favorite thing to do when riding on a train is looking out the window and fantasizing while listening to music. I haven’t ridden on a train in ages, so this Jason Shron’s video brought back the memories. It shows you the world from inside a train as it slowly glides along the tracks. But there’s a fun twist: that’s not a real train, and neither is the world around it. Jason built a miniature version of everything and put a GoPro inside the model train to film its journey through the mini-world.

Jason is a big fan of trains and he even has a life-size replica of a train in his basement. With tons of time on his hands during these never-ending lockdowns, he finally managed to work on a project he had dreamed about ever since he was a kid. It’s a model of a Toronto-Montreal, Canada line called Kingston Subdivision. In the video, you can see his 2″ (5cm) tall model train arriving in Brockville station, Ontario, Canada. He put a tiny GoPro Session inside the train to film the footage. He even added sound effects so the whole thing looks even more realistic.

The only thing that makes it obvious that this is a miniature model is human figurines near the end of the video. Before and after that, it all looks incredibly realistic. If I didn’t know this was a miniature, I’m pretty sure I wouldn’t figure it out. Jason says this shows you how much you can accomplish with model trains. And if I may add, model trains, cars, and other things also let you take realistic photos. This project, or this one, are great examples.