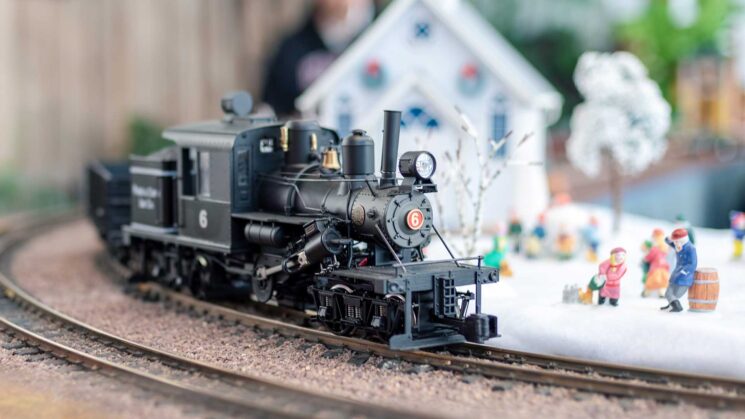 Developments in camera tech over the last decade have meant that we can put them in places that many of us previously thought impossible. One such person is Adam Honse, who built up a model railway with his dad back in the early 2000s and has wanted to stick a camera on it ever since. And now, thanks to the Raspberry Pi Zero and its tiny camera module, he can. So he did!

The view from the train’s camera is essentially like having an FPV camera mounted to the front of it, showing the train’s-eye-view of the model world through which it runs. If not for the occasional break in the illusion due to the background of the shot (and the lack of detail vs full size objects), it almost looks like it’s travelling through a real landscape.

Thanks to the Raspberry Pi, Adam writes, “it is technically possible to stick a full blown Linux quad core computer on board and stream real-time 1080p video”. He says he built a little train car out of scraps that lets the camera rotate with the wheels so that it turns towards the track, even before the main train carriages have. A behind-the-scenes photo posted to Twitter shows the setup.

Slightly improved, all that's required from the extra car is the battery now. Would be nice to draw power from the track. pic.twitter.com/Z7QdtpYVPK

The Raspberry Pi Zero and the camera draws power from a battery sitting in a car behind it, but he’s already thinking about ways he might be able to draw power directly from the track. It’s a DCC track, which would allow him to potentially pull power from it, but as he describes on Twitter, he’s facing one or two little challenges to overcome. Hopefully, he’ll figure out a way to be able to fully hide it inside a train at some point, too.

It’s a cool little project and as tiny cameras develop even further and start shooting higher resolutions and faster frame rates (and the Pi evolves to handle it), I can see this potentially becoming quite a useful technique for miniature set work in low budget movies.

« Did you know your iPhone camera helps you identify plants?
VSCO rebrands to support a wider range of creatives »