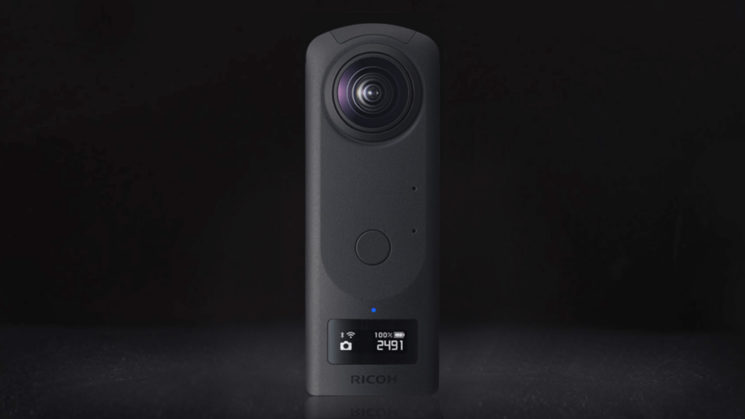 Coming out of CP+ 2019, Ricoh has today announced their latest 360° camera, the Ricoh THETA Z1. The new model expands on the previous Theta V with a number of new features, the most noticeable of which is the somewhat giant leap from 12 to 23-megapixel still images – which can now be shot in Adobe DNG raw format as well as jpg. It also features a new processing algorithm offering HDR, interval composite shooting for things like star trails, as well as bracketing for up to 19 shots.

Ricoh was the first to release a mass-produced all-in-one 360° camera way back in 2013, and they’ve come a long way since that original Theta. Resolutions are higher for both stills and video, and wider support for 360° content has come to social media offering users more ways to show off their 360° content. But what does the latest Theta Z1 have in store? Well, let’s have a look at the key features…

Those big sensors are some of the largest found in consumer 360° cameras. Whether or not they’re larger than those in the recently released Insta360 ONE X (review here!), I’m not sure. Insta360 doesn’t seem to mention the sensor size. But they are slightly higher resolution when shooting stills offering 6720×3360 stitched vs the ONE X’s 6080×3040 18-megapixel resolution. 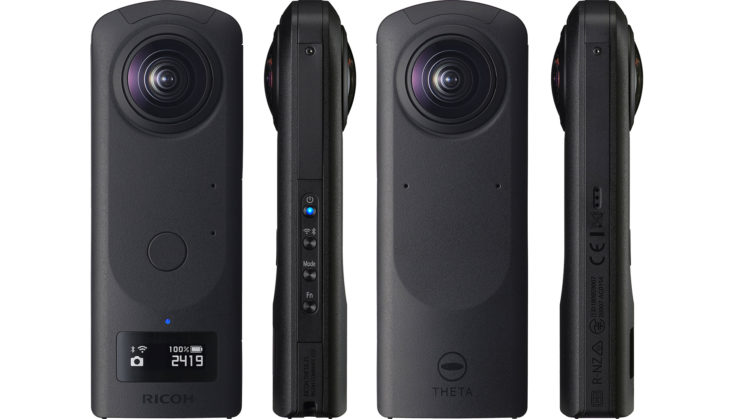 Where the Theta Z1 does shine when it comes to video, at least on paper, is with a built-in 4 channel microphone supporting 360° spatial audio. So, with the appropriate playback equipment, you’ll hear the sounds around you as they were recorded in the real world. With a VR headset, you should hear the audio change in direction as you turn your head – at least, in theory.

Battery life in the Theta Z1 seems fairly standard, at around an hour’s worth of video, or 300 photos. It’s powered from a built-in lithium-ion battery. I would assume that you can use it while you’re charging it, as that seems to be quite standard for 360° cameras these days.

Interestingly, there doesn’t seem to be any kind of memory card support with the Theta Z1. Unless the specs are incomplete, it seems that everything is stored on an internal 19GB storage chip, which can hold around 350 raw photos, 2400 jpgs, or around 40 minutes of 4K video (or a little over 2 hours of 2K). If there really is no microSD storage, then this may be a problem for all but the most casual of users, I think.

I use ProGrade 64GB and SanDisk 128GB microSD cards in the YI 360 VR and Insta360 ONE X, and they’re very easy to fill on a day out when you’re recording everything because you’re not entirely sure what’s may be about to happen. So, the Theta Z1 would need a way to be able to quickly unload that internal storage and wipe it in order to be able to keep shooting. It does have a Type-C socket in the bottom, so perhaps you can cable it to an Android phone as a mass storage device and pull the files off it.

There doesn’t seem to be any sample photos or videos available yet. So, I’d be curious to see some side-by-side comparisons of this one against the Insta360 ONE X, as well as the older YI 360 VR to see how well the 4K resolution video holds up against the higher resolution competition. And also to see how the Theta Z1’s stabilisation compares because the Insta360 ONE X stabilisation looks like it was shot on a gimbal it’s that smooth.

B&H shows that pre-order shipping is expected to begin at the beginning of April, but if we’re already doubting their listed price, this may not be accurate, either. We’ve reached out to Ricoh to confirm the release date and pricing, so we’ll update when we hear back.

Update: Ricoh has confirmed that the $999.95 pricing is correct.

For now, you can find out more about the Ricoh Theta Z1 on the Ricoh website.