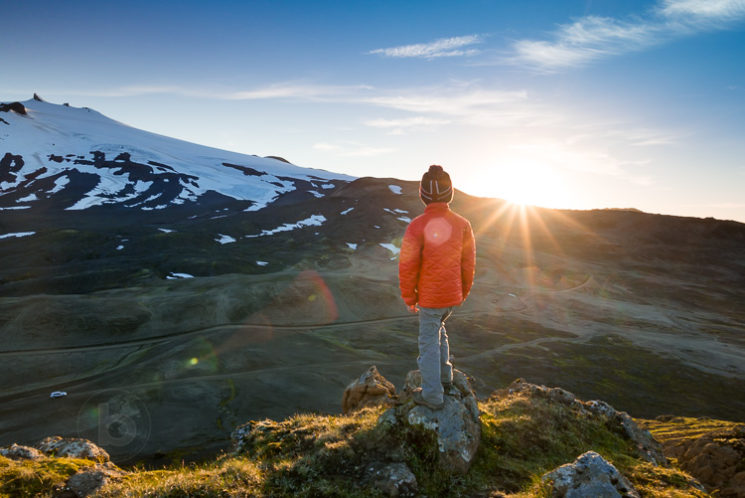 Have you ever heard of a reverse graduated neutral density filter?

If not, this is a specialty filter designed to balance the lighting conditions between foreground and background at sunrise or sunset – when the sun (and therefore brightest part of the image) is at the horizon.

You’re not going to use this filter on a regular basis – but when you do need one, you’re going to be very happy that you packed it!

Back in June we published our recommendations for “Five Essential Filters For Travel Photography”. 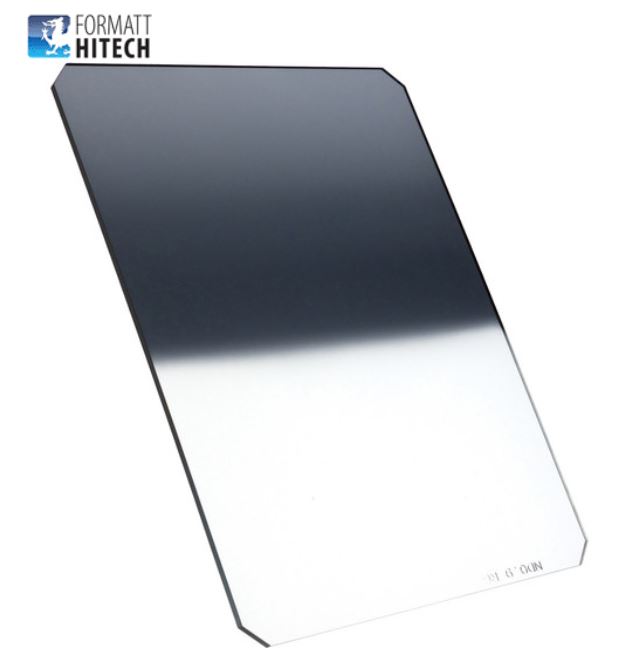 Just after that article, I spent six weeks traveling around Europe with my family on an extended stock photography session (here’s why you should Go On A Photography Vacation This Year).

I carried that reverse graduated ND around with me for the entire trip and didn’t use it once…until the very last day of the trip – literally while we were driving back to the airport.

On our last day in Iceland, we were visiting Snæfellsjökull National Park on the Snaefellsnes Peninsula in western Iceland. Since our flight home was early in the morning, and it never really gets dark in Iceland during summer, we decided to drive through the night from Arnarstapi back to Reykjavík and Keflavík. 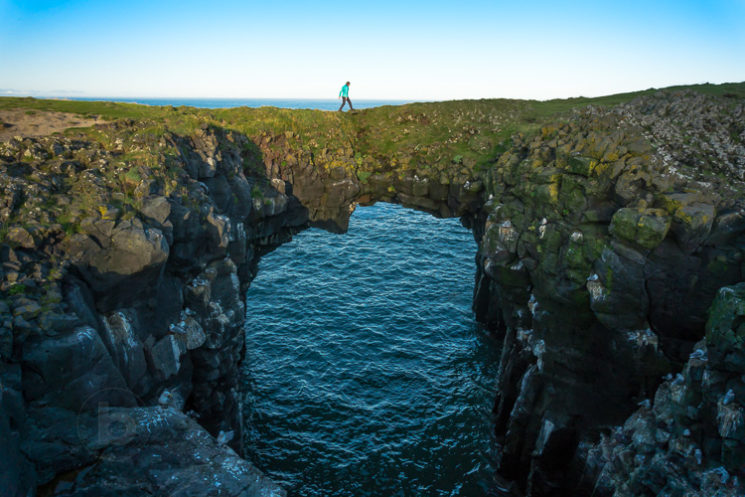 Purely on a whim we decided to take F570 across the peninsula and check out Snæfellsjökull glacier on the way (by the way, I’m pretty sure the Icelandic word for glacier jökull is the coolest word in the world). 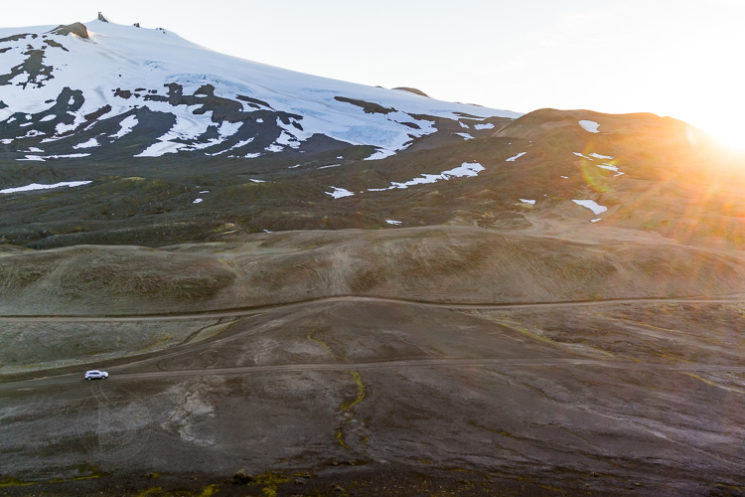 Along the way, we stopped for a break and my son Isaac decided that he just absolutely must stretch his legs by immediately running up a big hill beside the road.

It was near midnight and we were in shadow where we stopped on F570, but the top of the hill was still catching the last of Iceland’s six hour long summer sunset, so I had an idea that the view at the top might be stockworthy (our family term for stuff that’s interesting enough to make the kids model for much longer than their attention spans would like). 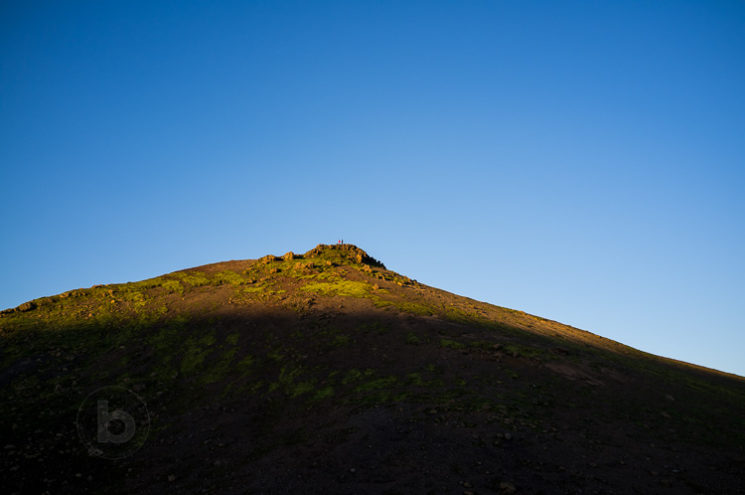 By the time I grabbed my camera bag and caught up with him, Isaac was nearly to the top of the hill (can you see us up there?).

The hill as it turned out was actually the edge of a volcano caldera and the view from the top was absolutely amazing.

Looking south-east we could see the southern coast and cloud shrouded peaks of the Snaefellsnes Peninsula. 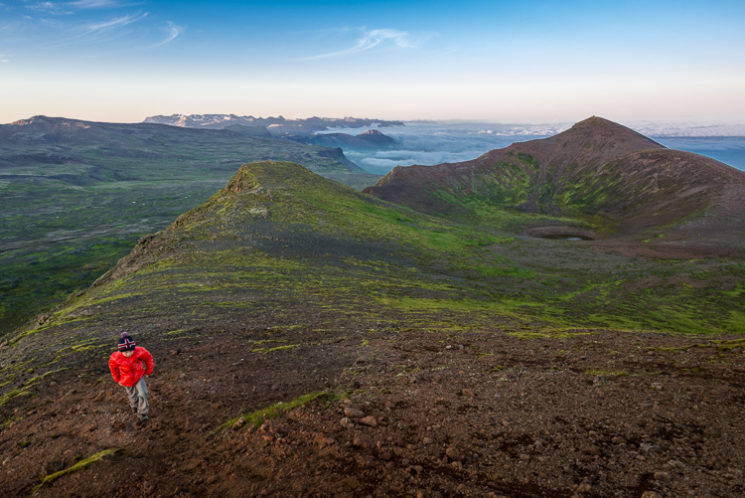 Looking north-west, we could see the northern coast of the peninsula with the last bit of the day’s sunshine just peaking over a ridge on the Snæfellsjökull glacier (yes I realize the translation is Snæfells-glacier glacier – but it makes more sense to me that way).

It was Iceland windy up there (that is to say, windy enough to blow small children to Greenland), but we were able to spend a little time capturing a few photos – some of which are my favorites from the entire trip.

As it turned out, this was the exact scene that a reverse graduated neutral density filter was made to capture: dark foreground, bright sunset at the horizon, bright sky (but still darker than the sun).

Using the reverse graduated ND filter was the only way I could have captured the full dynamic range of this scene (at least without resorting to HDR bracketing) so I was pretty happy to have it with me.

With my Nikon 20mm f/1.8 I ended up simply holding the filter in front of the lens without a filter holder, while I got Isaac to perch on a rocky outcrop facing the sun.

Here is the finished photo and if you look closely you can clearly see the effect of the reverse graduated neutral density filter. 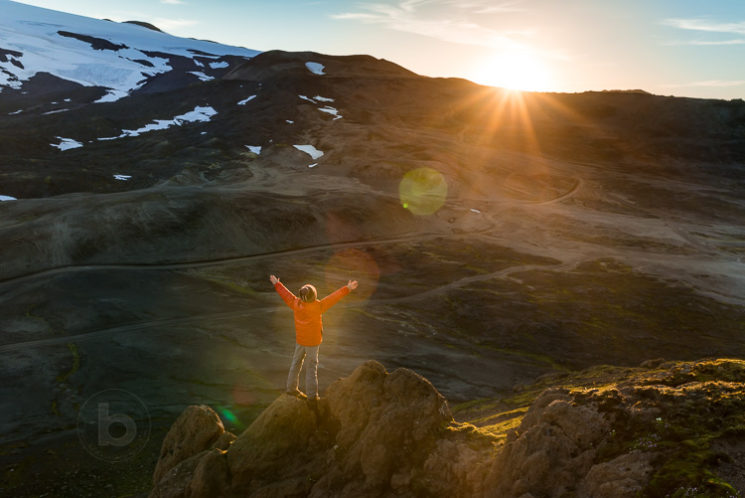 I should also note that this is one situation where I was really thankful that I grabbed my Nikon DSLR from the car and not my Sony mirrorless, because with the DSLR’s optical viewfinder (OVF) I could see exactly what the filter was doing and where the lens flare was falling.

It took a little bit of adjustment to position the filter gradient on the horizon and I had to shift my position a bit to make sure that the sun flare exactly bisected the scene from the sun right across my subject (I personally find it nearly impossible to actually see details like this on a mirrorless optical viewfinder), but the resulting photo turned out to be pretty good right out of camera (a few minor finishing touches were added in Lightroom).

Then it was back down the hill (which was a lot easier than climbing up), and back on the road. 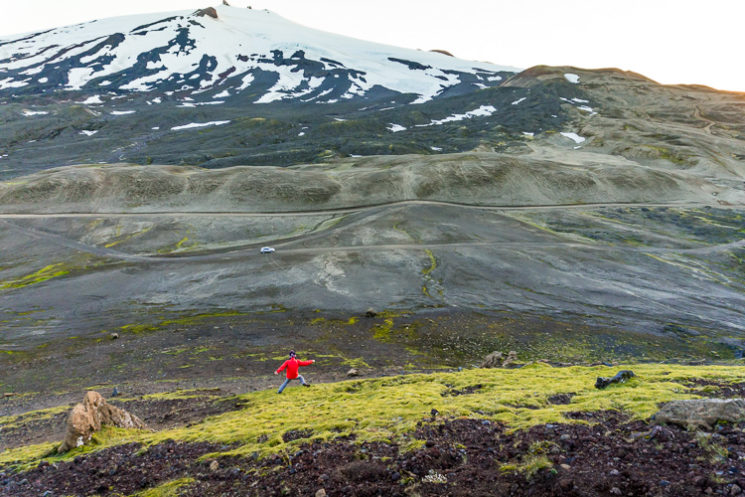 What Filter Has Saved The Day For You?

Have you had a similar experience?

What filter did you pull out of your camera bag to save the day?

« The Lenscapt is either the silliest or most genius idea for lens caps ever
DPRSplit lets you pull more dynamic range out of your Canon 5D Mark IV raw files. »