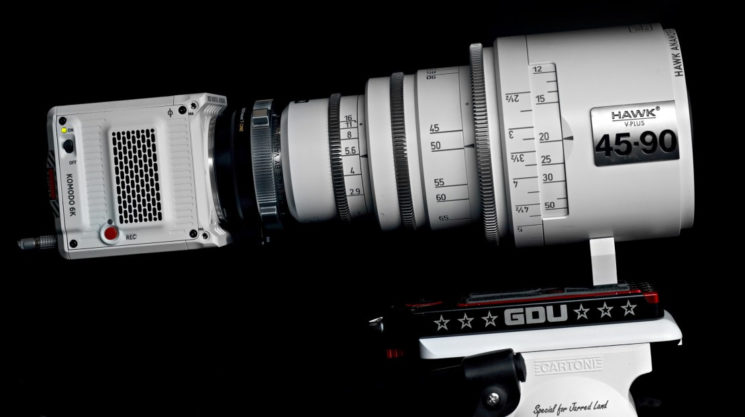 The RED Komodo 6K rumour mill is starting to get some confirmations as it gets closer to production. RED President, Jarred Land, now has a “Stormtrooper” Komodo 6K in his hands, the white colour typically denoting a pre-production unit, and has let loose a few more specs, including the fact that it uses a global shutter sensor.

Stormtrooper REDs usually signal pre-production. It’s impossible to predict how the next stage will go, because literally everything could go wrong, but if you look back historically and use Helium as a reference, We went from Stormtrooper Heliums to shipping to normal Heliums everyone 3-4 months later.

So if you need to make a guess.. that’s about as good as you can get. But… as we bang on them more.. that could go completely sideways.

We are Probably ready to start talking specs soon though… since those wont change that much now. Although most of you have figured it out anyways.

Since making the above post over on RED User, Jarred has received quite a few questions regarding its capabilities. And while he’s keeping the full final specs pretty close to the vest, he has teased some new information and confirmed one or two suspicions and hopes, as well as releasing some pretty hot looking images of the unit itself.

RED is releasing the Komodo 6K as what they call an “auxiliary camera”. And “Komodo” is both the camera body and the sensor (historically, RED has given the sensors their own unique names separate from the body that houses them). Essentially, this means that it’s like a special-purpose support camera designed for going into places where you might not want to risk your main camera, or your main camera simply doesn’t work. Like throwing on a helicopter gimbal or being used as a crash cam.

Of course, most of us don’t have the Hollywood budgets to waste on a camera like the Komodo 6K as a crash cam, so given the quality of footage it’s expected to produce, it will likely become the main camera for many indie filmmakers who choose to purchase one.

And yes Komodo will support Anamorphic…

With the rise in popularity of anamorphic lenses lately, this will be great news to many who had been considering picking up the Komodo 6K. When it comes to actual frame rates, Jarred confirmed what we can expect for 6K and, yes, a global shutter sensor. After being asked about 4K 60fps, he had this to say…

You should be good then. Pretty safe to say after beating on the stormtrooper all day today you can expect full sensor 6k 40fps, 6k WS @ 50fps. Which means 4k @60fps shouldn’t be a problem, but I have not actually tested that yet. And yes, that’s all in global shutter mode.

Jarred also teased a photo of his pre-production Komodo’s touchscreen UI. saying that they are “still tweaking” it, but that it already looks pretty awesome. We tend to agree. And while it appears to be monochrome, Jarred admits that it’s just a “crappy BW filter on my phone”. It is actually a full-colour display. That being said, this particular part of the UI, he says is actually pretty much monochrome, aside from coloured outlines around the selections. 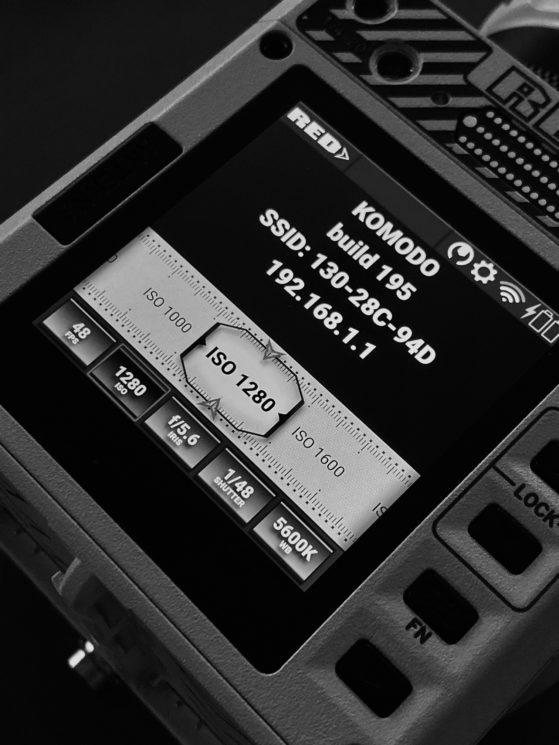 A lot of people were talking in the forums about custom colour options (with some presenting mockup photos), and even custom laser engraving on the cameras they purchase, for an extra fee. Jarred has neither confirmed nor denied whether this might be an option, so perhaps it’s something they’re debating internally and haven’t made a final decision on yet. One thing he did say, though, was that “Bayhem Green is off limits… that’s his”.

A complete list of features we know about the Komodo 6K that have been confirmed has been put together by the folks over at 4K Shooters, And it’s shaping up to be a pretty decent system for not a ridiculous amount of money.

Although the specs say that it offers “full-sensor” 6K, we don’t know exactly what this might mean as far as the sensor size itself goes. “Full sensor” in this context just means that it will use the entire sensor when shooting 6K video, not necessarily that it’s a “full-frame” (35mm, as photographers understand it) sensor, despite the Canon RF mount.

And while the global shutter sounds nice, it often comes at a dynamic range hit vs the regular rolling shutter sensors we’ve mostly been using so far.

With the camera set for release in 2020, possibly quite early in 2020, it will be interesting to see the final specs once it finally is all set in stone. And while it will be significantly priced compared to cameras like the Blackmagic Pocket 6K, Sigma FP and Panasonic S1H, it will also be substantially less expensive than most other RED cameras.

And… well, it will have a global shutter.