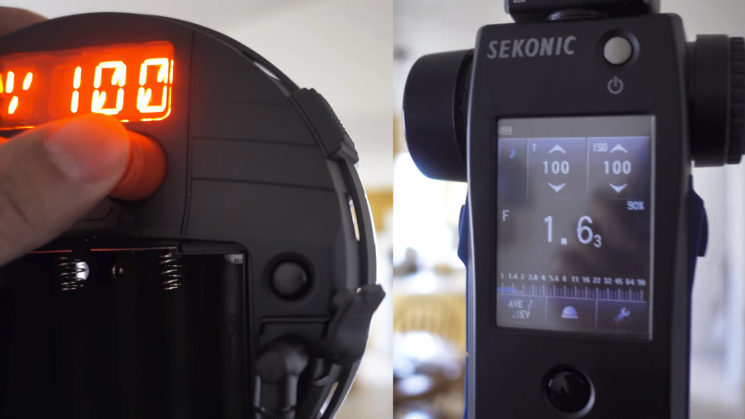 The Rototolight Neo 2 seemed to cause a little controversy when it was first announced. The specs on-paper didn’t look all that great. Rotolight were quick to respond and dispute the assertions being made against the Neo 2. Now, it’s out in the wild, and videos are starting to show up to see just how it compares.

For example, this one from photographer Luis Gabrial, who compares the Neo 2 with a Godox speedlight. Testing their output side-by-side with the Sekonic L-858 meter. And I have to say, it doesn’t give me much confidence in the Neo 2’s ability.

Gabriel sets his camera and L-858 meter to ISO100 with a shutter speed of 1/100th of a second.  The L-858 meter is positioned 6ft (a little under 2m) from the light. Each light is metered in two ways. First, triggered via the camera and then with the test button on the back of the light itself.

1/100th of a second is below the camera’s max sync speed. This is worth noting. as this is where speedlights are at their most powerful. To counter this, though, the Neo 2 is also running at its maximum possible output. The white balance is set to 4110K, and it’s being powered by the AC adapter. The speedlight’s output, though, is also somewhat crippled by the fact that it’s inside a Mola Setti reflector with mesh and opal layers of diffusion, drastically reducing its output.

The readings really don’t look all that great for the Neo 2, especially when you consider that the speedlight is zoomed to 24mm, and inside a modifier. The Neo 2 metered at f/1.6, while the speedlight measured f/5.6 inside a Mola Setti reflector. And with the diffusion sock applied onto the Mola, the meter reading only dropped to f/5.

One thing this test doesn’t show is how the two compare at high-speed sync speeds. The Neo 2 specs suggest that it will maintain its output all the way up to 1/8000th of a second. Experience tells us that a speedlight will not. The Sekonic L-858 is capable of metering high-speed sync. In fact, it’s the only meter on the market that is capable of it. So, hopefully, there’ll be a follow-up test.

Maybe at those super fast shutter speeds it can compare. Below sync speed, though, it looks like you’re far better off with a speedlight.

Does the Rotolight Neo 2 live up to the hype? This photographer doesn’t think so