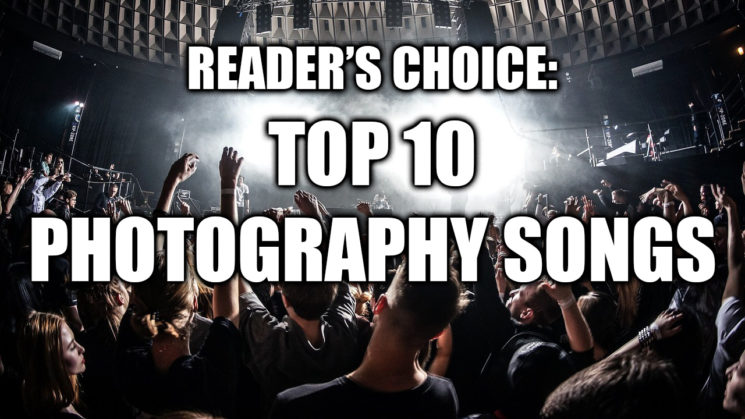 Last week, I shared with you ten of my favorite photography songs. I had tons of fun writing that article and I loved seeing you coming up with more great suggestions after it was published. So, I decided to make another list. Only this time, you are the DJs. Here the top ten songs about photography, photographers, or photos that DIYP readers have suggested. And just like last time, there’s a very special bonus, too.

There are so many bands that I’ve never paid too much attention to, and Rush is one of them. But this is something that I definitely need to fix! Our reader Charlie Bruce suggested this song, and it was quite a discovery for me. Thanks, Charlie!

Here’s another band I didn’t really listen to. Even though I love some of the 1970s and 1980s music, I’m not too passionate about glam rock/metal. Still, I liked this song and its ‘80s vibe, and I thank Don Navarro for introducing me to it.

This is another song suggested by Don Navarro. The moment I heard this beat, I thought: “I think this is my kind of song.” And I was right. I’ve never listened to Spoon, I don’t think I’ve ever heard any of their songs, but this is definitely a perfect choice for the song to hear first. It made me want to listen to some more.

Since I’m a fan of The Beatles and I’ve heard everything they’ve ever recorded, it’s really funny that I forgot about Ringo Starr’s Photograph when assembling my previous list. But hey, Glenn Inwood was there to remind me of this beautiful song. thank you, Glenn!

I think that the last time I heard this song was when I was, like, eight years old. Of course, I had no idea what the lyrics meant back then (I only spoke Serbian back then). So I’m really happy that Michael Massey reminded me of this gem and that the song had me dance in my chair while writing this. :)

Obviously, this song is about taking some dirty pictures. As John Atkin tells me, it’s a punk-pop classic, and it really sounds like it. This genre is not one of my strong areas, so this was the first time I heard the song – and I liked it. I hope, however, that the lyrics are not about a professional photographer, but rather about a guy taking dirty pictures of his partner. With consent.

Speaking of a professional photographer and “dirty pictures,” You’re Gorgeous gave me shivers when I heard the lyrics. Our reader Kard reminded me of this song: I’ve heard it before, and I remember the video back from when I was a kid. Of course, I had no idea what the lyrics were about until I heard it again just recently.

The song is about a sleazy photographer who takes advantage of his model. The music is great, the song is catchy, but the lyrics are a reminder of what kind of a photographer not to be. Ever.

Here’s a suggestion from Matthew J. Scampoli. I must admit I’ve never heard of Death Cab for Cutie, but I’m glad that I did now. This song is beautiful and sad, just the way I like my music.

Progressive rock is another genre I’m not too familiar with. So apparently, I haven’t listened to Yes even though they’re prog-rock legends. Thankfully, Peter Withe did, and he suggested the song Into The Lens.

Well, I guess there can’t be a list of photography songs without Nickelback’s Photograph after all. A few people mentioned it in the comments on the blog and on my Facebook profile; four people even asked me in person why I hadn’t included it in the first list. So there you go: Photograph by Nickelback. I still prefer the parody, though.

Here are some suggestions that come from my friends who are also DIYP readers. Since there were just enough songs to fill out the top ten list of songs in English, these were convenient for the “Bonus” section because they’re in other languages.

I’m just getting acquainted with music in German other than Rammstein, Laibach, and Falco. My friend Slavica suggested another performer that I could listen to, and a song that’s perfect for this list. Du hast den Farbfilm vergessen is sung from the perspective of a girl whose boyfriend forgot to bring the color film for their camera while they were on vacation. Similar to me forgetting to bring an SD card to Athens a few years ago. But that’s another story.

Even though I learned Italian in college, I didn’t listen to much Italian music other than Fabrizio De Andrè. It’s always good to discover new music, and this time my friend Lorenzo helped me with this beautiful and sad song from 1981.

This is another suggestion from Lorenzo. I absolutely loved this song and listened to it several times in a row. Half of it is in Portuguese, but later on, the lyrics are in English so you don’t need a translation. Note that this is the cover of the song – the original was recorded by Antonio Carlos Jobim in 1967, and it’s also a beautiful piece of music.

So, let me know – how do you like your list of photography songs? I must say that I’m impressed by a few things. First, it’s the number of your suggestions, but also the fact that I truly liked all of them. Next, the number of people suggesting Nickelback’s Photograph is fascinating as well. Although, 99 if not 100 percent of them were ironic. And last but not least – not a single soul suggested Lady Gaga’s Paparazzi. I’m really glad you didn’t because it would add one song I really don’t like to this otherwise beautiful list.

Finally, I want to thank you all for your suggestions, for helping me discover new music, but also for reminding me of a few songs I’d completely forgotten before reading your comments. I’ve added all your suggestions to my previous YouTube list, so you have everything in one place.

Here are the top ten favorite posts from 2017