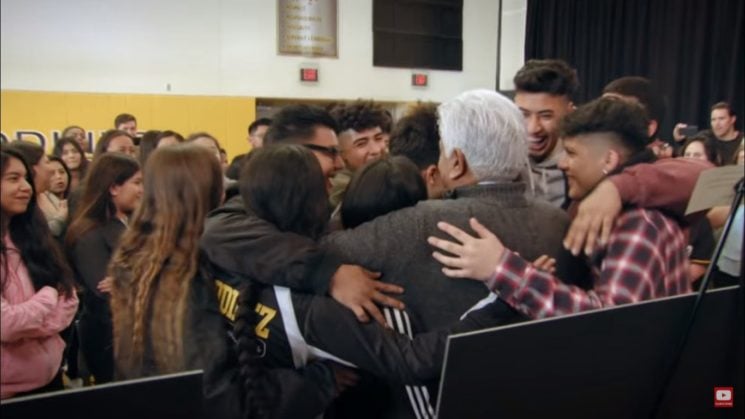 Good teachers can have a big impact on our education and skills, but even our personality and attitudes. Students of Godinez Fundamental High School in Santa Ana, California decided to pay a tribute to their favorite photography teacher, Chester Maharaj. In this video from Adobe Creative Cloud, you can see how the students used the skills Mr. Maharaj taught them to create a wonderful surprise for him. And be warned, there might be some ninjas cutting onions around you as you watch.

Chester Maharaj is a former photojournalist who captured some of the world’s most iconic moments. Then he gave it all up to become a teacher. He realized that he could use what he learned over the years to let someone else benefit out of that. And apparently, his students appreciate everything he has done for them so much, that they made a truly amazing surprise for their teacher who is so devoted to his job.

The students witness that Mr. Maharaj is patient and kind, and that he has taught them so much. Not only photography skills, but many other values they have in life. They wanted to show their gratitude and appreciation for Mr. Maharaj, so they used the skills he taught them to create an exhibition and shoot and edit a video.

As explained in the video, Mr. Maharaj thought he was being interviewed and filmed for a documentary. All of a sudden, he saw one of his photos on a school wall. He was surprised, but he had no idea what he would see after entering the school. His students had selected the photos that are highlights of his photojournalistic career and threw an exhibition of his work. But then, they showed him what they think his best work is: it’s the work he has done as a teacher, and his students thanked him for that in the video they created themselves.

Needless to say, this whole tribute has driven Mr. Maharaj to tears. It really is such a wonderful gesture, and I was also crying a bit while I was watching the video. I think this is a great way to thank your favorite teacher for what they’ve done for you: by using what they’ve taught you.

[Students Create a Surprise for Their Favorite Teacher via FStoppers]

The photography teacher that nobody wants