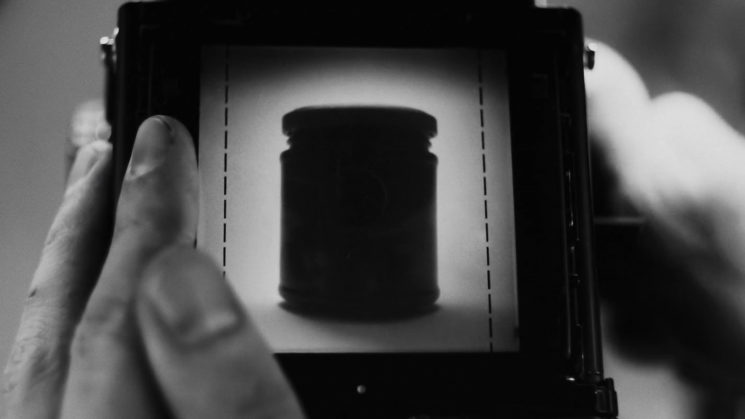 These days, making a landscape appear as if it were inside a jar would typically be relegated to Photoshop. In the past, it was done by the use of double exposures. In a double exposure with analogue, you’re shooting twice without advancing the film. So, you’re basically adding one photograph on top of another (like Photoshop’s “Add” blending mode).

But there’s really no substitute for doing it in-camera. You can do this with modern DSLRs, but it’s a little more tricky than it was with film. In this video by Anders Lönnfeldt, photographer Christoffer Relander shows us how it’s done. Done well, it’s an amazing and fascinating technique. But, it is not one that’s easy to master.

There’s no voiceover on the video, so while Christoffer doesn’t go into elaborate detail, the steps are all outlined in the video itself. The first step is to pick a suitable jar to remove all labels and thoroughly clean it out. After the jar is clean and dry, the inside needs to be painted black. How many coats you’ll need will depend on the type of paint you choose. Some cover better than others. Then, photograph it.

This is where the challenge of double exposures comes in, especially with subject matter like this. The jar is photographed in the studio. You can’t exactly carry on shooting, and then rewind back to the previous shot you wanted when you get to the location. So, that’s it, one shot in the studio captures the white background and blacked out profile of the jar on the film. Then you’re off out the door.

This is where things get tricky, because you can’t see the image you’ve just shot. You only have an educated guess as to exactly where everything is in the frame. So, you head out to your location, plan as best as you can and hope for the best, to capture your second shot. In this case, a landscape.

As mentioned, this works in a similar way to Photoshop’s “Add” blending mode. You’re photographing one subject (the bright white seamless with the black jar and some detail around the lid and edges), and then adding the exposure of a second shot into the same image. So, the blacks will brighten up, and the whites will pretty much blow out.

Because the white seamless is already as bright as it can get, exposing it to another scene doesn’t change anything. You can’t really get any brighter than pure white. So, the second photograph appears in the shape of the jar. Some of the highlights and texture and from the glass and lid will also present themselves in the combined image.

With modern digital equipment, something like this would almost have to be done in post. Pretty much the only way you can do it for real with digital is if you take the jar and white seamless out with you on location. If you did shoot it in the studio, as soon as you turn your camera off after taking the first shot, your camera’s forgotten it’s in the middle of a double exposure.

As an aside, the video itself is rather beautiful. The mysteriously lit grainy black & white footage look can be a little bit cliché. Here, though, it’s been used to great effect with some pretty epic scenery.

Do you make double exposure images? On film or digital? Do you shoot them in-camera? Or do you just take separate shots and blend in Photoshop to get a greater level of control? What do you think to the whole idea of double exposures? Let us know what you think in the comments.

Double exposures work for video, too, and here’s how to make them