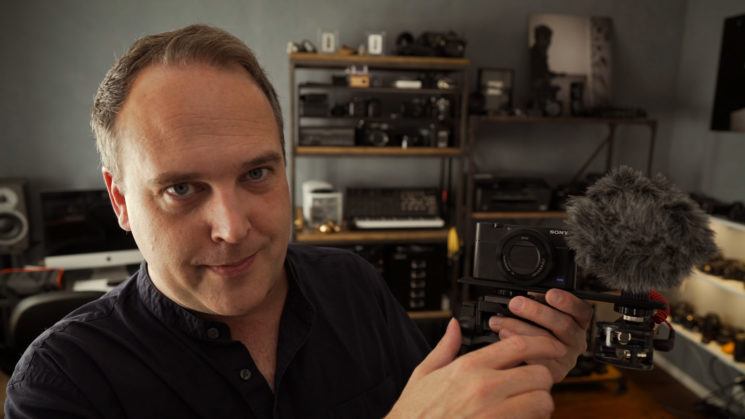 If you want the best sound in your video, you really do need an external microphone. Many cameras today offer the ability to plug a microphone into them, which you then usually mount from the hotshoe. Not all cameras, however, do. Two cameras, particularly renowned for their vlogging abilities don’t have microphone sockets, which is quite surprising. Those are the Canon G7X II and Sony RX100 V.

Ted Forbes at the Art of Photography has the Sony RX100 V and as one might expect, uses it for vlogging. The problem is that the RX100 V, like pretty much every other camera out there, has awful built in microphones. Ted solves his audio problems with the help of a bracket, a Zoom H1 and a Rode VideoMicro. In this video, Ted explains other setups he tried, and how he arrived at this one.

It’s a nice, light, neat little setup. Everything’s together in one place, no long dangly cables, holdable with a single handle and quick to turn everything on and off. Only three extra pieces of kit add quality audio to the unit.

That’s only $176. If you shop around or are patient and wait for bargains, you may be able to get the whole setup for under $150. It does have one slight drawback though, but this problem arises for anybody who records sound externally. You need to sync up your footage and your audio in post. Manually, this can be a painstaking process.

Some editors, though, like DaVinci Resolve have features built in to automatically try to sync separate audio and video clips. For those running software which does not, you might want to check out PluralEyes. It’s a great piece of kit which lets you export to a number of applications via FCP XML files. Automation like this makes shooting separate video and audio a breeze. I use such features all the time now.

Another option you could use if you wanted to go even lower budget, but still get a higher level of quality, is an external microphone for smartphones. I’ve used the Rode smartLav+ for a few videos before now, just recording to an old iPhone 4S in my pocket. I just leave the iPhone recording the whole time, and then Resolve automatically puts the clips where they need to go.

So, recording audio separately from the video isn’t the chore it once was. These days, you can quickly and easily sync everything up, and chop out the scrap.

What do you think to Ted’s setup? Would you have made similar choices? Or would you have suggested something else? What do you do about the sound in your videos? Do you just use the camera’s built in mic? external mic on the hotshoe into the camera? Or an external recorder with separate lav or shotgun mics? Let us know in the comments.

How to make your own 35mm daguerreotype safely and cheaply