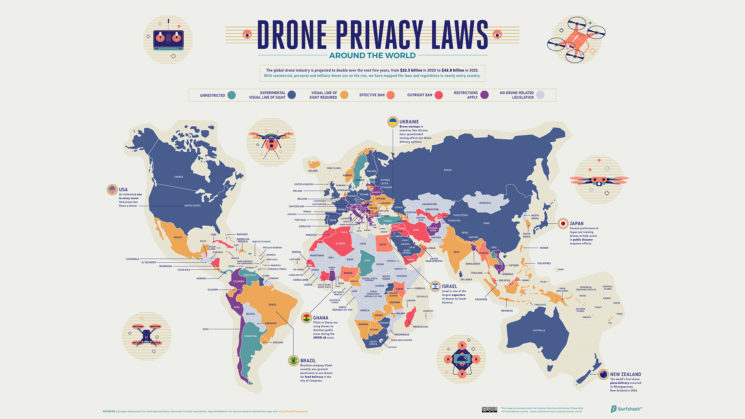 Ok, so maybe you’re not planning to travel much for a little while just yet, but when the world eventually opens back up, people are going to. And some of you are going to want to take your shiny new drone with you to capture scenes of the places you visit from the air. But every country has its own unique and specific drone regulations that you may not be aware of.

So, the folks at Surfshark have put together a very handy list covering… well, pretty much the entire planet on where you can and can’t fly a drone. As Surfshark is a VPN company, naturally their focus is on the privacy issues surrounding drones around the world, but as privacy is a big factor in some drone regulations around the world, it’s a big deal. 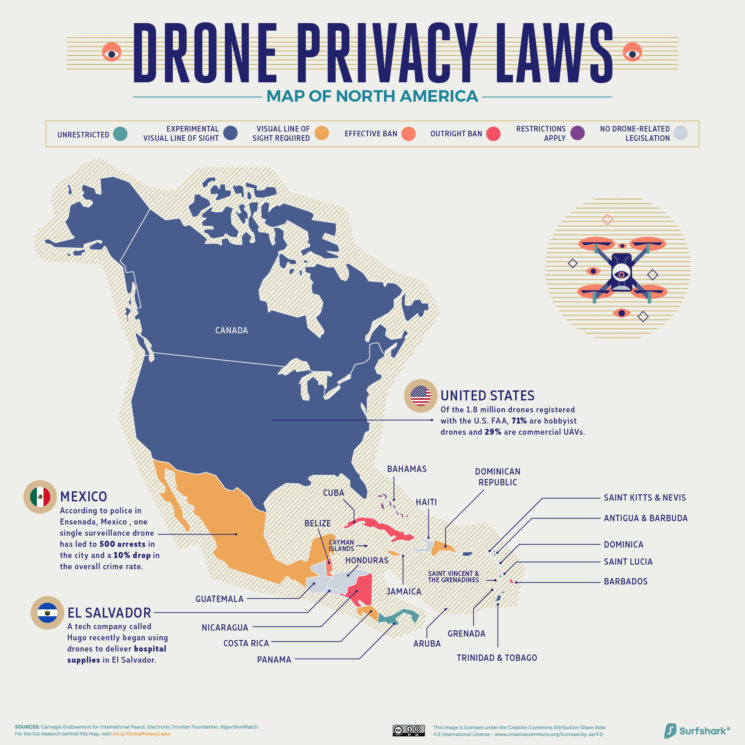 Surfshark compiled drone legislation information from just about every country in the world to discover how each of them treats drones, particularly in regard to privacy. Some nations have an outright ban on drones completely while others are far more tolerant – and at least one country on every continent allows for unrestricted use. 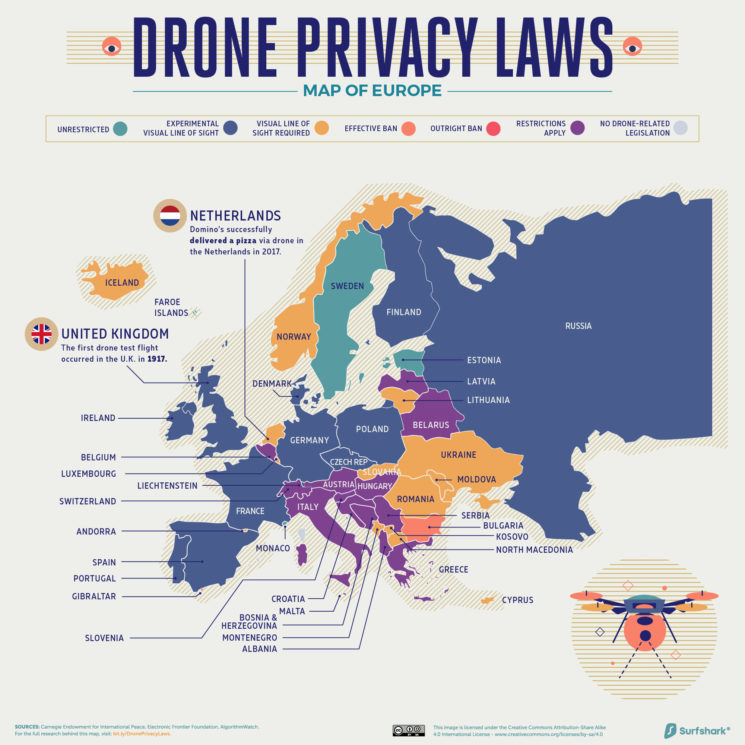 Although many of the laws are more safety-focused rather than based on privacy issues, the safety restrictions do offer a level of privacy protection as a knock-on effect. And some of the laws are extremely strict. In Ghana, for example, if you’re caught flying a drone without a license, you could wind up with a 30 year prison sentence. 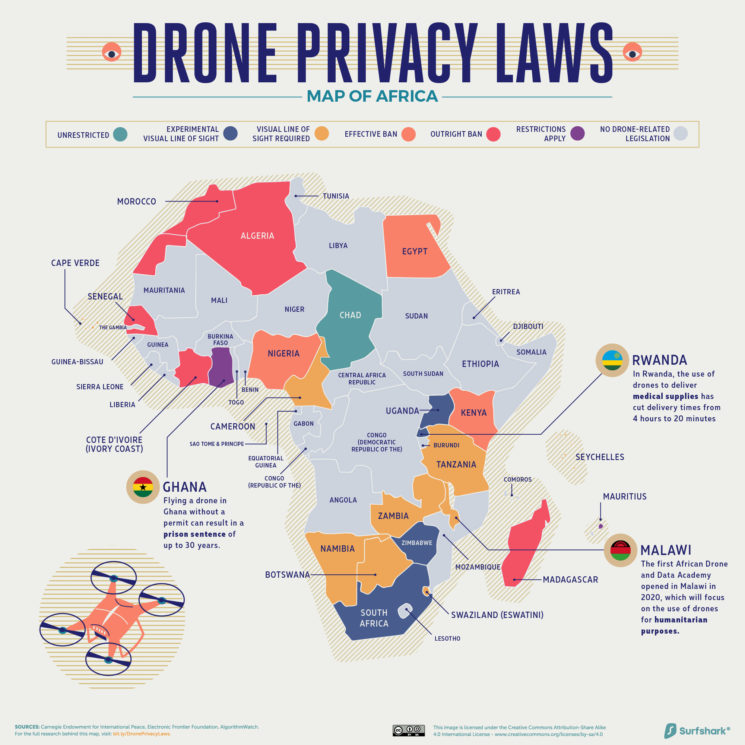 But while not all of the laws are quite so harsh, some of them are a little quirky. In Latvia, for example, drone pilots must wear an identifying piece of clothing, such as a hat or shirt, drone flights cannot last for longer than an hour in Peru and in some countries, such as Bhutan, the only people allowed to fly drones at all are the government. 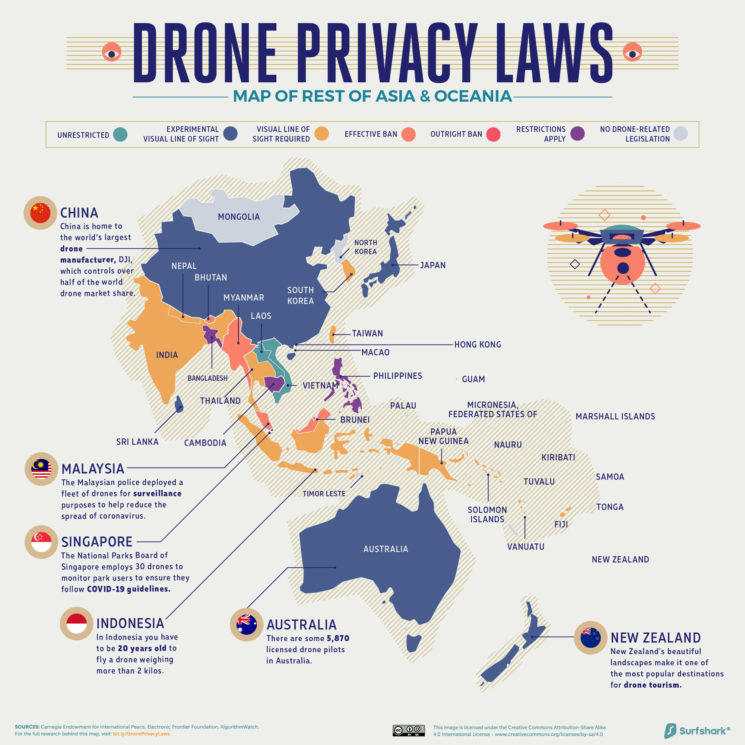 As interesting as the laws themselves were some of the statistics they uncovered about various countries, as well as drone technology. In the USA, they found that 71% of the ~1.8 million drones registered with the FAA are flown by hobbyists, but an impressive 29% are commercial UAVs. I expected that number to be much smaller. 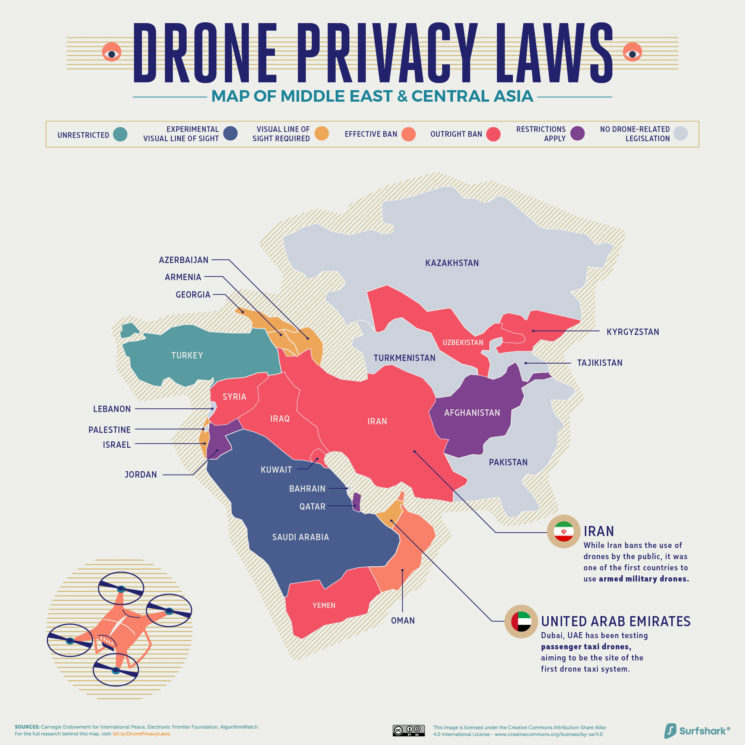 And while the number of drone rules and regulations around the world is ever-growing, so is the number of patents filed for drone technology. Surfshark says that drone-related patents grew by 34% from 7,076 in 2017 to 9c485 in 2018 alone. I shudder to think how many there are now. 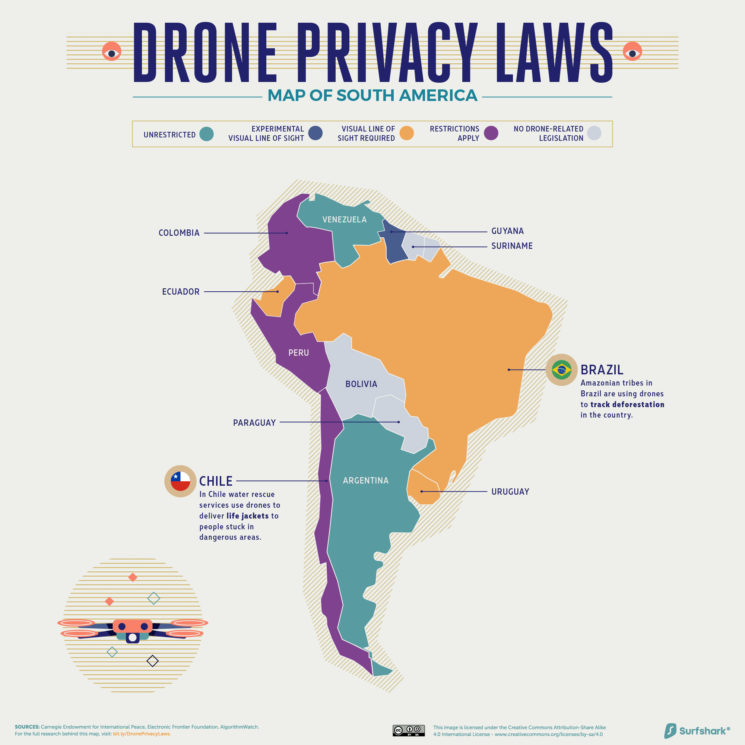 With as relatively young a technology as drones are, I expect we’ve only just scratched the surface of what drones will become. It wouldn’t surprise me if we were more than double that 2018 patent figure by now, and now that other big names like Sony are entering the fray to give DJI some stiff competition, I expect we’ll see a massive increase in the speed of drone tech development and drone capability over the next few years.

Head on over to Surfshark’s website to see the complete report. It makes for some interesting reading.

[via Surfshark / Images used with permission]