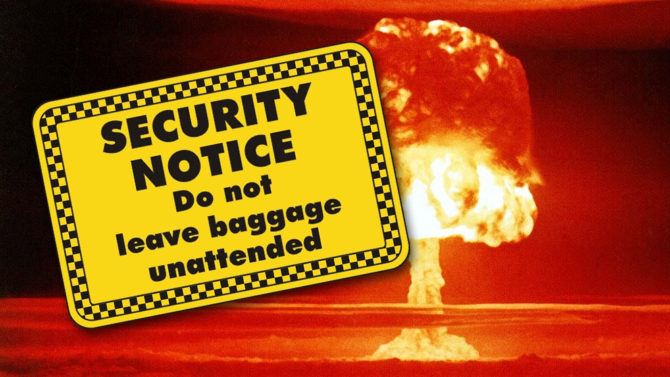 If you ever need a good reason to not leave your baggage unattended, this is it. After a “hard black box” was found on the steps of City Hall in Kansas City, what happened next seems obvious. The suspicious package was reported to the police, who promptly came and blew it up.

KSHB reports that police were called to the scene around 4:30am on Monday after the package was discovered. Upon arrival, the street was cordoned off, and people directed to leave the area.

From the description of “hard black box”, we can assume that it’s probably a certain brand of hard case known for durability and toughness. A ubiquitous style of case amongst photographers, but they can seem quite out of place to the general public.

Several blocks around city hall blocked off.
Police found a suspicious package on the steps south of city hall. pic.twitter.com/bDV05GZbrf

Local reporters started taking to Twitter to warn locals that streets had been closed and to avoid coming nearby. KSHB showed a map of the affected streets, to help those travelling in the early hours.

These roads around city hall are blocked off due to a suspicious package on the steps south of city hall. #KCTraffic pic.twitter.com/lgaizOBOSy

Bomb squad has sent out their robot to check out the suspicious box near city hall.
Several streets shut down pic.twitter.com/vF6KvcuyOJ

After sending out the robot to investigate, the bomb squad kitted up to go and check it out for themselves.

More bomb squad suiting up. The streets around city hall are still closed. Be advised if your headed this way. pic.twitter.com/8mDLq8Gcif

A few minutes later, the package had been detonated.

The police sent out an email notice.

Statement from @kcpolice on suspicious package found south of #KC City Hall. Turned out to be camera equipment pic.twitter.com/MoBmrGdizM

The Kansas City Star reports that in a statement put out by Kansas City police that security guards found the “hard black box” about 3:40am. It was detonated in a controlled explosion at around 6:30am. This is when it was discovered that the contents were a tripod and camera equipment.

Aside from the mayhem that ensued, I can’t understand how a photographer can leave their kit out so late. In the middle of a busy day with people rushing all around and you’re behind schedule, yeah, maybe. But at 3:30am?

Nobody has yet come forth to claim the remains of the case. No doubt, however, if any of the camera’s details are intact, a serial number may help to determine the owner. It still seems odd, though, that somebody would abandon a case containing camera gear on the streets so late.

But, let this be a warning to you all. Don’t leave your baggage unattended. Make sure all your gear is packed up and removed at the end of a shoot. It may only get confiscated, or it may get blown sky high.

What do you think? In the event that they find the owner, should they be prosecuted for wasting police time and resources? Should the owner’s insurance have to replace the equipment? Let us know in the comments.