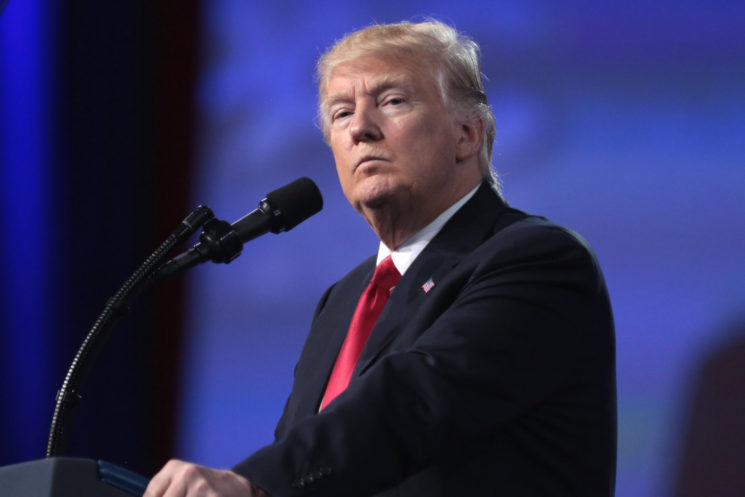 I’m sure you’ve seen a photo of Trump’s notepad filled with all-caps letters scribbled with a Sharpie. It’s been all over social media, and it has already become a meme material. Getty Images photographer Mark Wilson is the man who took this photo. In a recent interview, he revealed more of how he got the shot that went viral overnight.

In a conversation with Wired, Wilson revealed that many reporters who would have covered Trump’s remarks on Tuesday were busy covering the impeachment hearings. However, he said that the area where photographers and reporters were stationed was still pretty crowded.

If you’re curious about the gear, Wilson had brought a Canon 1DX, a 100–400mm lens, and a 24–35mm lens. It’s not stated which focal length he used to take the photo of the notes, but I believe that he used the zoom lens. When the press conference began, Trump started reading from his notes and waving his arms. This gave Wilson a clear view of the notes.

“I quickly noticed that the pad contained large handwritten notes in Sharpie and focused my camera to capture what was on the page,” he told Wired. And so he captured a photo that has already become iconic.

Trump carried hand-written notes and print-outs of tweets as he left the White House. Photo by Getty's Mark Wilson. pic.twitter.com/kxROdam0qC

Wired notes that at the moment of taking the photo, Wilson didn’t realize that he’d captured an “instantly iconic moment.” He said that he was “just taking a picture of a page of notes.” But after Getty Images tweeted the photo and it went viral, it was obvious just how important this photo may be. At first glance, sure, it’s funny and it’s definitely meme material. But if you dig just a bit deeper, this photo tells you something about Trump, his rule, and how he sees himself.

By Popular Demand: Blood, Hands, Notes And A Gift Card

« This hyperlapse takes us on a journey through Lisbon hunting for the mythical “unicorn duck”
Peak Design’s Version 2 Everyday bags come with recycled material, increased durability and new designs »