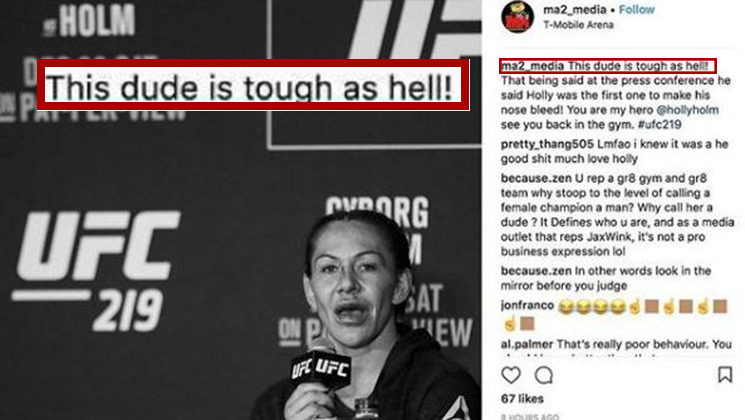 Mark Aragon, staff photographer of Jackson-Winkeljohn, was recently ban from covering UFC fights. On December 30, 2017, Aragon covered a fight between Holly Holm of Jackson-Winkeljohn and Cris Cyborg. After the fight, he posted a photo of Cyborg to his Instagram, calling her a “dude” and referring to her as a male. The post resulted in a public backlash, and it eventually got UFC to pull Aragon’s media credentials for future fights.

The staff photographer from Jackson-Wink posted this last night. Apparently he was also credentialed to the fights. Would expect a lot more from such a well respected gym. https://t.co/EYXRLE4Vs4 pic.twitter.com/YaAMuEyJOA

This dude is tough as hell! That being said at the press conference he said Holly was the first one to make his nose bleed! You are my hero @hollyholm see you back in the gym. #ufc219

It is not acceptable for an official representative of @hollyholm @jacksonwink_mma to call me transgender following my Fight. Their official photographer was given a backstage credential to attend the @UFC and I expect an apology or their ability to get credentials for future UFC events to be affected by these actions.

After a strong backlash, Aragon and Jackson-Winkeljohn apologized (kind of) through social media, trying to justify Aragon’s comment. They wrote that the photographer heard Cyborg’s team mock Holm and her performance, and he acted “out of anger and frustration.”

In response to our media person's recent Instagram remark about Cyborg, there is a backstory as to why he made his…

After Jackson-Winkeljohn posted the explanation to Facebook, Cyborg responded:

Your photographer was given media credentials under the assumption that he could remain professional in a work setting. His transgender comments are not acceptable, and I should not be asked to work in an environment where sexual harassment is acceptable.

She added that she hoped his media credentials were denied “allowing a more professional photographer to take his place.”  Her management had contacted UFC with her concerns, and indeed, UFC eventually banned Aragon from covering future UFC events:

UFC is aware and troubled with the recent statements made by a social media representative from the JacksonWink MMA Academy in Albuquerque, New Mexico as it concerns women’s featherweight champion, Cris Cyborg. UFC does not condone or tolerate the remarks that were used. The organization has reached out to the JacksonWink team to inform them that the individual in question will not be granted access for future events.

As Bloody Elbow writes, banning Aragon is an unexpected move from UFC, since they had their own history of mocking Cyborg. They believe it turned out to be more profitable for UFC to promote Cyborg than to trash her, and they merely set Aragon as an example. In any case, I believe mocking anyone this way is immature and low. As for the photographer, I understand we all have emotions, but staying professional often requires us to put these emotions to the side.