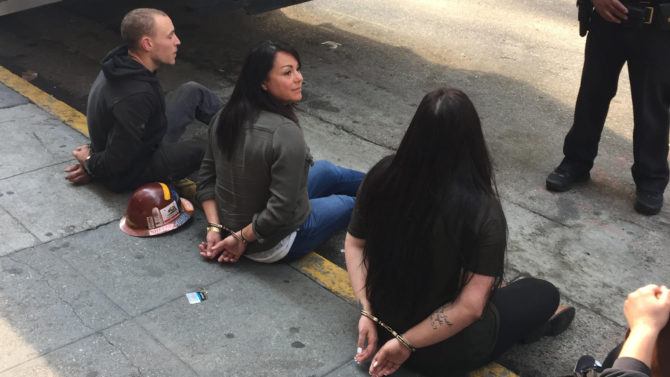 Photography is not a crime. Sucker punching a man and beating him while on the ground is. This lesson was learned by three individuals in San Francisco recently after attacking photographer Peter Muller. Muller had taken a couple of photos of an accident that had occurred to send to a friend over Snapchat who was out of town.

Muller says the accident was due to a taxi driver falling asleep at the wheel. He drove into the sidewalk, “obliterated the news stand”, continued into a shoeshine shop, critically injuring two people. Muller had been photographing the aftermath of accident when the trio confronted him.

Paramedics had already begun removing the last of those involved in the accident when Muller arrived on the scene. He then began to photograph the property damage and the taxi because he couldn’t believe what he was seeing and how much damage had been caused. This is the point at which they approached him.

These 3 lovely individuals verbally attacked me for taking pictures. They assumed I was taking a photo of the victims, even though all I did was send 2 direct snapchats of the taxi & property damage to an ex-colleague who was out of town.

Initially he was verbally abused by the two women. Upon attempting to walk away, the man that accompanied them felt this would be a good time to sucker punch him from behind. All three went on to attack him once he hit the ground.

Fortunately, the little coward that sucker punched Muller was unable to overpower him. Muller held him to the ground while he awaited the police, who were already just a short distance down the street. One of the women delivered repeated kicks to Muller’s head. Passers-by quickly came to help, to help restrain the women.

After the police arrived, all three were arrested thanks to the many witness accounts and the video shown above filmed from a nearby window.

I find it very poetic that these people got angry about pictures/video and are probably going to be f**ked by a picture/video.

This isn’t the first time we’ve heard stories of photographers being attacked doing completely legal things. It probably won’t be the last. Hopefully, as more are publicly brought to justice, people will learn that you just randomly attack people.

To be honest, I think Peter displayed quite some restraint in his response. I’m not sure I would have. If something like this ever happens to you, be sure to capture as much video evidence as you can.

Have you been the victim of confrontation like this? How did you handle it? Have you seen a rise or a decrease in reactions like this to photography near you? Let us know your thoughts in the comments.

« Yi Technology are releasing a handheld gimbal for action cameras?
Test shows that Rolling shutter on the 5D Mark IV is a pretty big issue with 4K »