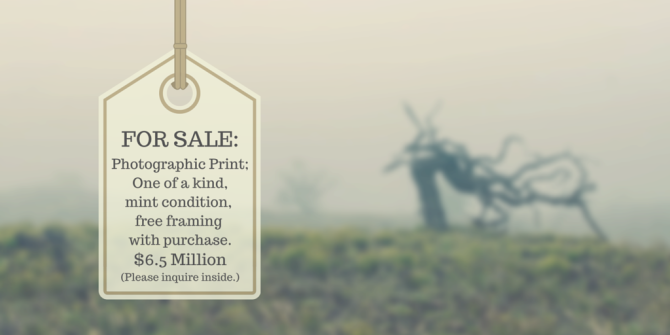 Is a photo worth whatever someone is willing to pay for it?

There are a lot of brilliant photographers who haven’t been discovered or who otherwise struggle to sell a single image for what usually turns out to be less than a living wage. It isn’t that the photos are not good or usable, the market is just over saturated and it takes more (a lot more) than just taking a good photo to make a living doing it. There’s also the issue of the “weekend warriors” who are willing to drastically undercut the competition hoping they get a little publicity out of it. And that’s not to say they shouldn’t be getting their own, too, or even that their photos are not up to par, because a lot of times they are. It just makes it really discouraging for the folks who are out there trying to make a living at this and do not have a day job to fall back on.

And then a headline like this one appears in the news feed and for a fleeting moment we feel as though there’s hope. Maybe there is a market for fine art photography after all. And not just the average, hope-you-break-even kind of market that we’re accustomed to, but the kind of paradise where buyers are dishing out $6,500,000 for a single photograph. Could it really be true? Does that kind of utopia actually exist? Turns out, if you’re Pete Lik, utopia is reality.

As you may recall, Lik already secured a spot on the list of most expensive photos ever sold when his photo titled “One” sold for a cool $1M in 2012. But that’s just pocket change compared to the $10 million in sales he made this month to a single buyer. The buyer of the multi-million dollar trio, who wishes to remain anonymous, is the proud new owner of 3 new Lik pieces (click the image names to see the photos): Phantom which set the world record with a price tag of $6,500,000. Illusion which cost an additional $2,400,00, and Eternal Moods for which the buyer paid $1,100,000.

“It is noteworthy that the sales of these photographic works denote another milestone in the development of fine art photography, as well as a new benchmark for the value of Peter Lik works.” – Mark G. Tratos

While I’m not holding my breath on ever selling a photo for over a million dollars, the news is still encouraging. If not for me, then for you, or for the next guy who takes a leap of faith and commits wholeheartedly to being a full time photographer. Sure, it’s rare. A one in a billion chance, but it never hurts to dream, right? [ via Reddit ]