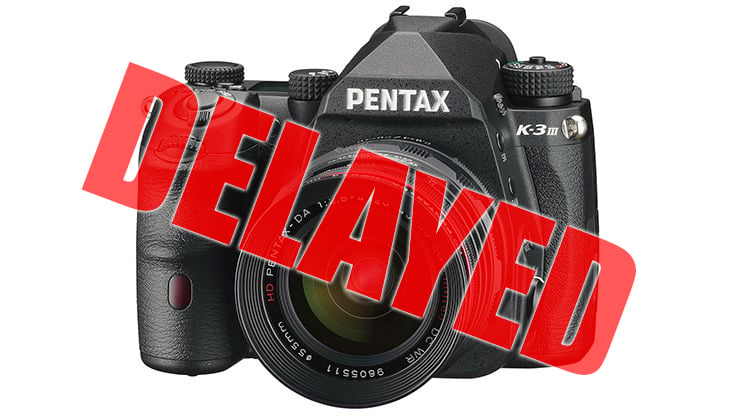 Ricoh was supposed to announce its flagship APS-C DSLR, Pentax K-3 Mark III, in just a few days. However, the company has just announced that the camera release will be delayed due to some production issues.

This isn’t the first time Ricoh changed plans for the launch of its flagship DSLR. It was initially announced for the end of 2020. But in October 2020, the company announced the launch of Pentax K-3 Mark III for the CP + 2021, which takes place between 25 and 28 February 2021. However, it looks like we’ll wait some more, and Ricoh can’t even say exactly how long at this point. Here’s the full press release:

We would like to present a progress report on the development of the PENTAX K-3 Mark III, the PENTAX’s new APS-C-format digital SLR flagship camera, whose development was first announced to the public on October 27, 2020.

Although it was initially announced that this camera would be launched on the market around the world premiere show “CP + 2021” of cameras and photographic images, scheduled to be held from February 25 to 28, 2021.

As some of the product parts are delayed, and we have determined that development will require a greater amount of time for us to achieve the exceptional performance and finest quality that is the hallmark of next aps-c flagship model.

We apologize for any inconvenience this delay may cause, and ask for your kind understanding of our development efforts.

Initially announced market launch date: The launch target is around the period of the CP+ camera exhibition, which will be held from February 25 to 28 in 2021.

Revised market launch date (forecast): We will inform you again in the near future.

The Pentax K-3 Mark III is supposed to offer quite amazing specs, especially considering that it’s an  APS-C DSLR. It packs a 25.73-megapixel CMOS sensor with an ISO range of 100-1,600,000. 1.6 million ISO, that’s pretty rad (although I wonder how usable it will be).

Just like there’s still no word on the release date, we also don’t know the price. But judging from previous speculations, it could retail at around $2,500.