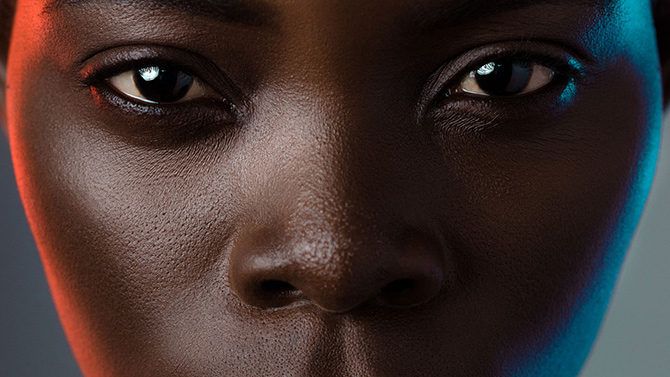 Originally from Ghana, photographer DextDee Livingstone had to travel all the way to China to discover his passion for shooting portraits, but we’re sure glad that he did.

Now back in Ghana, DIYP got in touch with DextDee to find out more about him, and to get some insight into how one particularly striking portrait of Doris was made.

It all started somewhere about four years ago. I schooled in China, and while I was in University there I bought a new camera. I got the Nikon D5100 and just started shooting. Mainly I was shooting events, but also portraits.

But I realised I was more interested in the expressions of people, just the face, what experience they were going through. If they are sad, if they are happy, if they see you with the camera pointing at them do they freak out, or something like that, so I was doing street photography as well.

Most importantly I really enjoyed the expression and concepts, how you tell a story just by the facial expression of what you’re going through. 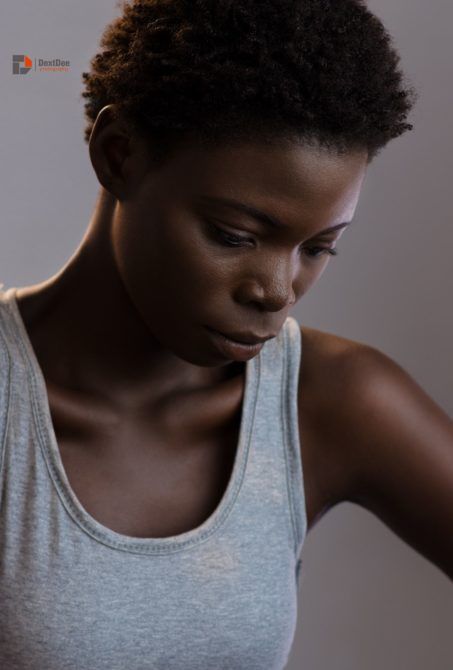 Shooting portraits for both commercial and private clients, DextDee does occasionally take time out from his busy work schedule for personal projects and collaborations to test things out, and push himself.

I do a lot of client work where companies come to me saying, “we have a bunch of people that we want you to shoot”, employees, friends, etc. and Doris is actually an actor. She was part of this company that she went through the training process, and as part of the graduation they were meant to takes some pictures, so I met her during that shoot. 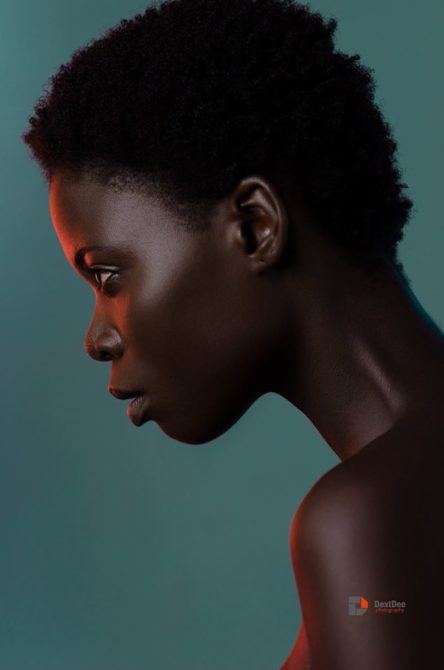 Something that I do, I pick some of these people from time to time, and it’s not everybody I see, but sometimes I think they have potential and it’s somebody I want to work more with.

So I contacted her after I was done with the whole shoot, and just said “I’d like for us to collaborate and work together. I think you’d be a great model, so let’s shoot on some ideas”.  We started to put some ideas together, and I sent her some pages of images, to see what she likes, and we came up with something that we’d like to go with.

At first we chose to go with a way of introducing her by the face. You know? Bold, “Look at me! This is me! I’m Doris! 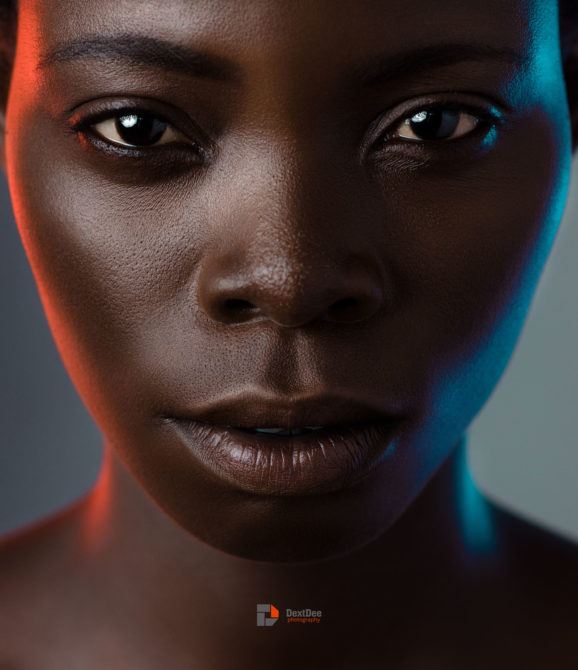 DextDee regularly works with friend and makeup artist Juanna Pomaa Mintah, who also did the makeup for this shoot.  Assistants for this shoot were Prosper (The Blue Dee) and Auramma (The Purple Dee).  The colours required a little explanation.

We are a team of Dee, so I am the Orange Dee and thus the logo.  If the image was shot and edited by the other team member, say the blue Dee, the logo would be blue, or purple, so you can know where the image is coming from.

This is part of my company’s branding.  We are 4 in total; Orange Dee, Purple Dee, Green Dee and Blue Dee.

The results certainly are impressive, even more so when you discover the modest equipment with which DextDee shoots, but there’s a connection to the subject in that image.  You look into those eyes and they just pull you in.  DextDee told us about the equipment he shoots with, and what he used for this image.

The 85mm is my favourite, and that’s the one I used for Doris’s shoot, because it’s sharp, it’s very sharp.  I like the way it renders the colours, and I think with the distance you can get, it’s very flattering to the face compared to the 35mm or the 50mm.  The 50mm is good, but I think compared to the 85mm, the 50mm doesn’t render the colours quite so well. 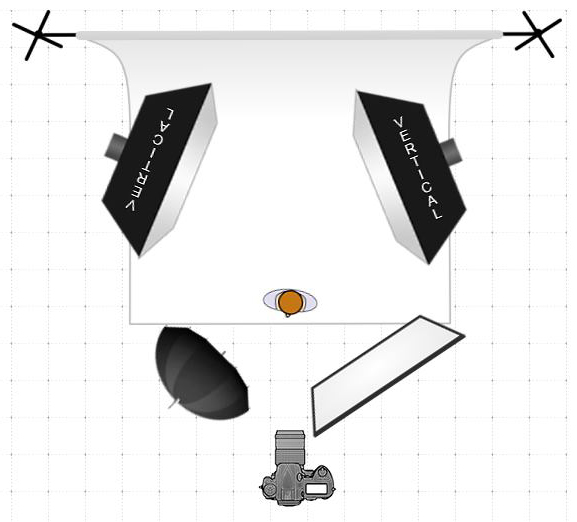 For lighting, I use speedlights.  I don’t have any big studio strobes or anything.  So I use a Nikon SB-900, a Shanny SN600n, and the Yongnuo YN468-II.  In this particular shot I used all three.

The SB-900 is my main light most of the time, because my trigger the Cactus V6 allows me to change the power from the camera.  That was camera left in front of the model in front of an 80cm octabox.

Back left was the Yongnuo with a red gel and to the opposite side was the Shanny with the blue gel.  They were each in 60×90 softboxes with a grid on them.

To the right side in front of the model was a big white board, acting as a reflector just to open up that shadow side a little bit.

No matter how good the shot looks out of the camera, digital images always require at least a little post processing, and DextDee went into some more detail on his post workflow. 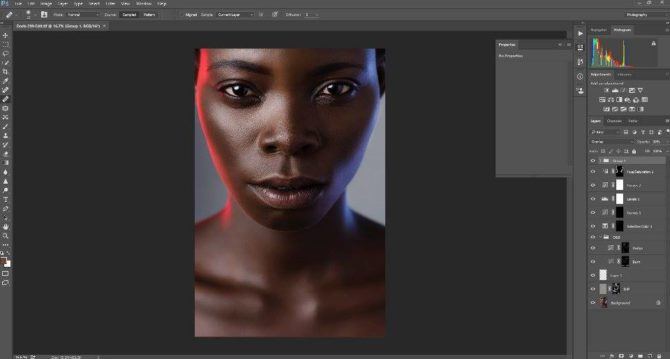 I do basic adjustments in Lightroom, if maybe it’s too bright, or you can see any chromatic aberration, and then I export it out to Photoshop.  That’s where I do the detailed editing.

I add an empty layer on top where I do clone stamp or healing brush, and Doris has great skin, so it was easy to edit.  Depending on the person I can go as far as doing frequency separation, or sometimes just dodge and burn only, but depending on the person that I’m editing determines which method I use.  In Doris’s case it was some dodge and burn, and a clean empty layer with the healing brush, and some inverted high pass to smooth out transitions in a couple of areas.

Then I bring it back into Lightroom and finalise the crop.  I don’t crop at all the first time I look at it in Lightroom or in Photoshop.  When I’m done with the final Photoshop edit, that’s when I bring it back into Lightroom to do the final cropping and maybe some colour adjustment.  Like in this image, I slightly adjusted the red and the blue of the gels to give more of a look I liked.

DextDee’s photography certainly shows that you don’t need to go out and spend a fortune on high end gear to shoot in the studio.  Sure, it can help sometimes, but there’s no reason why I you can’t produce amazing results with easily accessible and relatively inexpensive equipment.

DIYP would like to thank DextDee for offering his time to talk with us, and for sharing some of his work.