The concept of a camera that can follow a subject all by itself isn’t a new idea. Well, I say all by “itself”, the camera was usually paired with some kind of “homing device” on the wearer to tell the camera in which direction to point. But the Obsbot Tail needs no homing device. It uses AI tracking to follow a subject automatically, even if visual line of sight is broken.

The Obsbot Tail camera shoots 4K at 60 frames per second, with a 3.5x optical zoom lens mounted on top of a three-axis mechanical gimbal. Then the whole unit is placed down on whatever surface you wish to film from, and away you go. All you need to do is fire up your phone to see what the camera sees, tell it what you want to track, and so on, and it just gets on with it. 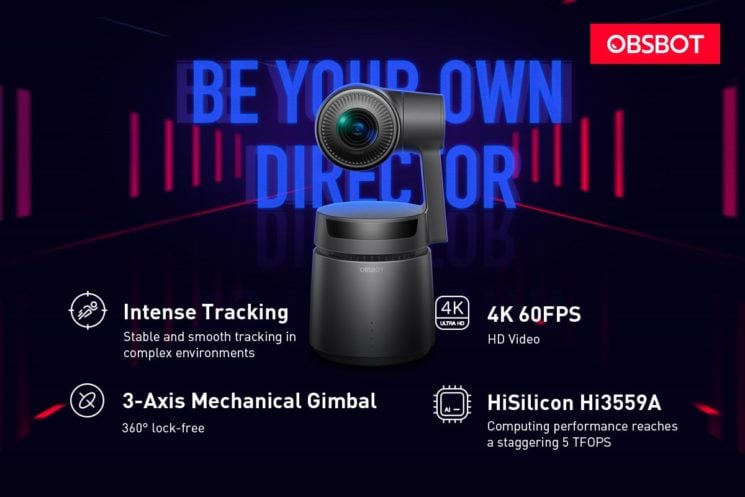 The AI inside the Osbot Tail also response to gestures. Remo Technology, the company behind the Obsbot Tail says that “based in visual learning, the gesture control function marks the first time a high-precision and steady gesture control system being integrated into video shooting”. DJI might not quite agree with that statement, although, DJI’s gesture control isn’t always perfect.

But the AI can apparently be programmed with three custom gestures to trigger certain camera functions. It will be interesting to see how more reliable gesture tech might have become.

It also seems to have some kind of automatic scene type recognition within the AI, too, as they say it “simulates the abilities of a professional photographer and automatically adjusts to the perfect composition for every photo and video”. That’s another claim I’d like to see put to the test. But, again, it will be interesting to see how far along the AI might have come for this sort of thing.

But the camera also supports HDR10 video and 3D Lookup Tables (LUTs) for colour correction or grading. The AI and image processing is all powered by a HiSilicon Hi3559A chip announced at CES last year.

No price has been set for the Obsbot Tail yet, nor has a release date. But Remo Technology are planning to do the launch through Kickstarter, where they say they’ll be offering up to 50% off the purchase price.

Personally, I think this would have to be coming out at a really good price (and the AI would have to be flawless) to not make me just use my phone on a regular 3-axis gimbal on a tripod. Zhiyun, DJI and others have had subject tracking built into their gimbal apps for quite a while now so you can track people as they or the camera moves.

If you want to be notified when the campaign goes live, or find out a little more about it, head on over to the Obsbot website.