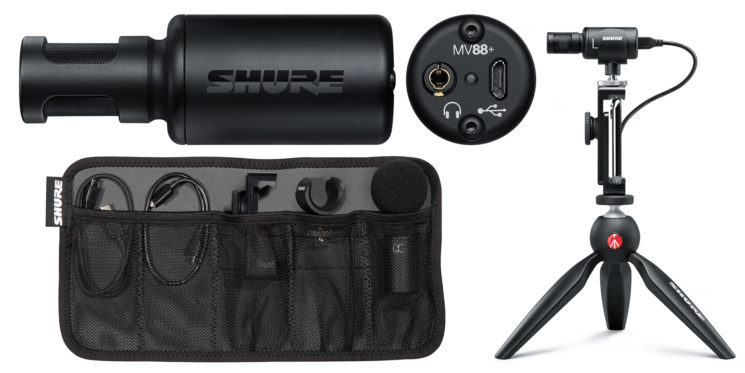 Shure has announced their new MV88+ Video Kit for smartphone video shooters. The kit builds on the success of Shure’s previous MV88 iPhone microphone. This time, though, it’s compatible with Android, too, via Type-C USB and it comes with a Manfrotto Pixi tripod, phone clamp, and shoe mount microphone clip.

The new MV88+ version of the microphone keeps the similar looking digital condenser mic to its MV88 predecessor, except with a sleek, black exterior. It also comes with the addition of extra tools makes it a much more versatile microphone. The MV88 plugged directly into your iPhone’s lightning port, hanging off the end of your phone. This limits what you’re able to do with it.

The MV88+ kit, on the other hand, comes with cables to mount the microphone in a more suitable position for what you’re filming. Not to mention the Manfrotto Pixi tripod, phone holder, and shoe mount phone clamp.

The cost of this kit is a little more than the previous model, coming in at around $250 instead of the MV88’s $150. But the new microphone comes with a wider range of compatibility, expanding into Android, and offering a headphone jack so you can monitor your audio while you’re recording it – similar to the Rode VideoMic Me-L.

The Shure website offers up several different ways of recording with the MV88+ and the Type-C USB connection means that it can even function as a USB computer microphone on your desktop or laptop. So, you’re not just limited to using it with smartphones.

The MV88+ doesn’t appear to be available on its own. It only comes as part of the kit, which is something of a shame. I own several Manfrotto Pixi tripods already. I don’t need more. I also have far too many phone holders that sit on top of tripods. So, it would’ve been nice to be able to get just the microphone and cables and save a little off the purchase price.

But, if you’re just starting to get a little more serious about shooting video with your phone, then this could be a good set up to get you going. As well as being a short tabletop tripod, the Pixi doubles up nicely as a handle for walking around with your camera while shooting – either yourself or whatever you’re facing. And the phone holder has a coldshoe on top into which the microphone mount slips. So, everything is kept easily contained together.

The best settings to create cinematic footage on your mobile phone