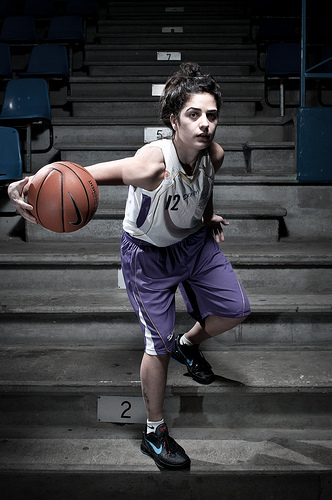 About two weeks ago I was invited to shoot a local ladies basket ball group for their yearly calendar. They are called Elizur Yavne and they play the third regional league (fifth place). It is a very mixed group of ladies with the youngest being about 18 years old and the most experienced one almost 40 years old. Nevertheless they are a unified team and it was a big pleasure to see them practice after the shoot. (Heck, anyone of them can probably kick my ass on the court).

There is a ton of inspiration out there for basketball shooters so a quick research was due. I recalled an old story by Destin Snipes and knew that I wanted to get a similar gritty look. While post has lots to do with that particular look, there was also lots of lighting involved. 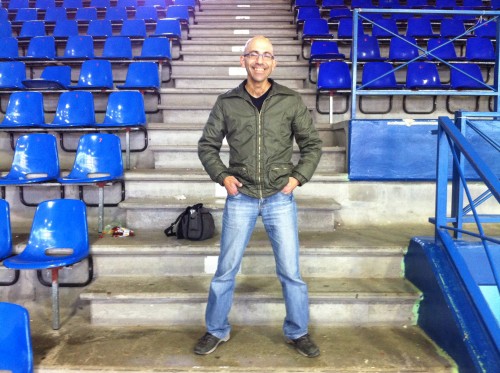 Since it is a local group, I could come in a day before and explore. They play at a municipal court which is pretty darn small. and it looked like the best possible location would be on the bleachers. For several reasons:

1 – we could not occupy the court while shooting. Another team (the guys) would be practicing there.

2 – I did want to add a bit of background and context and the chairs seemed like a nice touch.

3. I assumed that I would not be allowed to place lights on the court. I was soooo right. The housekeeper almost had a fit when he saw me coming in with stands to his precious court. So the actual day of the shoot. The assumption was validated.

Here is a picture of the setup we ended using: 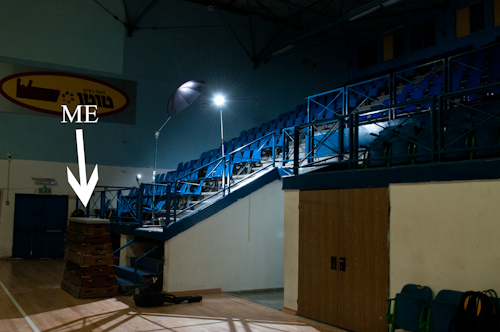 I knew I wanted to get nice rim lights so a strobe went up hi on the back left.

Key was provided with an uncovered softlighter II on a boom.

And another strobe clamped on a nasty was there for a subtle feel and to provide a catch light.

One of the issues with strong rim lights is that they create flare. light coming from behind the model and seen by the camera can impact the image quality and create those artifacts.I don;t have it quite nailed down, but it depends on both the light source and the lens. Some lenses just produce more flare than others.

How do manage that? by flagging the light from the camera while still letting it hit the model. I do this with a Honl Speed Strap and a piece of black corrugated plastic with a piece of Velcro. (Actually, I have two pieces of Velcro on the plastic, one for horizontal mounting and one for vertical mounting. And , yes, it is the same plastic I used for the grid). 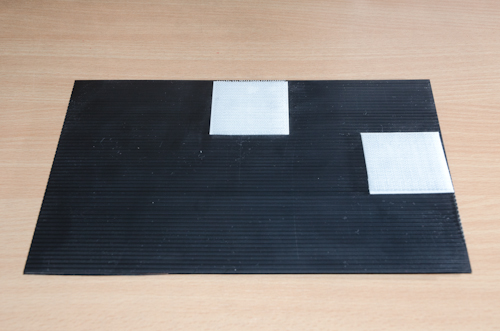 I was allocated a 35 minutes slot before practice. During that slot I had to shoot 8 players and a group shot. I got there an hour before to set up, and all the girls got there on time, so that was a good start.

So I had to know what I wanted from each player. Having a ball was pretty handy as both gave them something to do and made it easy to start a conversation. All I had to do is ask them to show me how to jump shot, spin or do anything with the ball.

One thing that had to managed is shyness, while the girls throw a mean ball, most did not feel comfy around camera so I had to make it a rule that once a player gets her shots, everyone else is away. Otherwise they would get too conscious.

For the group shot we got everyone together. I wanted to do something different from the individual shots and decided to remove the flag and have the strobe in the frame, kinda like a glamour shot. This is how it turned out. 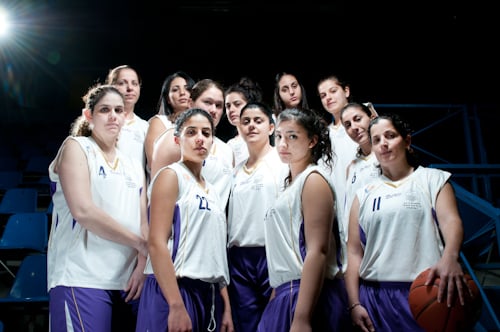 Following the prisiple of Dustin’s conversion and working the high pass filter,  basically I pretty much followed suit:

One layer of dodging and burning, one layer of desaturated high pass (with soft light blending mode) and a final layer to de-saturate. 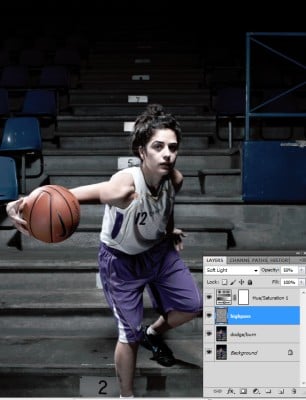 This was my first basketball shoot, it turns out it is a lot of fun and players are really great to work with. I hope many more will follow.

The Photek Softlighter is one of my always-in-the-bag modifiers. It double duties both as an umbrella (which is how we used it in this shoot) or as a semi-octabox for speedlights.

You can read a full review on it here.

The Honl speed strap is probably the best way to place stuff on your strobe. It can accept anything Velcro and has a wide range of accessories like flags, snoots, grids and gels. I did try to make my own once, but never got the quality and slickness of the original.