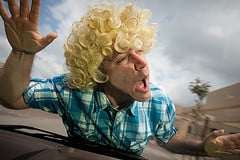 If you are tuned to DIYPs twitter and facebook accounts you know that something big is coming on May. We are diligently making preparations.

We thought long and hard about what will the best way to kick off our new product and decided on doing a video. So, directed by Zeke Kamm of Nice photo mag, we headed out to the wilderness.(You’re gonna have to read till the end if you wanna see it big :)

For this particular shot Zeke wanted me to take a “bad picture”. Crossing out all the regular “bad pictures” ideas – like soft focus, bad exposure and so on, we thought what can be worst than getting smeared on a wind shield. I say, not much.

So there we were me and my buddy Ron Uriel shooting me getting smeared against a window.

The first concern that we had (other than keeping my head intact) is how to position the gear we wanted inside the car. We needed a camera on a tripod and one strobe (more about the light in a bit).

We wanted a low angle and we figured that Ron can squeeze in the driver’s sit and operate the camera if we just managed to put it near the shift stick.

We used a Manfrotto 055CXPRO3 tripod with a 496RC2 head which allowed us to place one leg on each passenger’s side and have the third leg stretch out near the shift stick.

The inside of the car, which my face will be facing was pretty dark, and we needed something to light my face. Again, we had a hard time positioning the strobe. This is where a NastyClamp (reviewed here) came in very handy. We mounted the flash on the nasty and attached it to the passenger high handle. We also gelled the strobe with 1/4 CTO to maintain some nice skin tone. Here is a BTS shot. 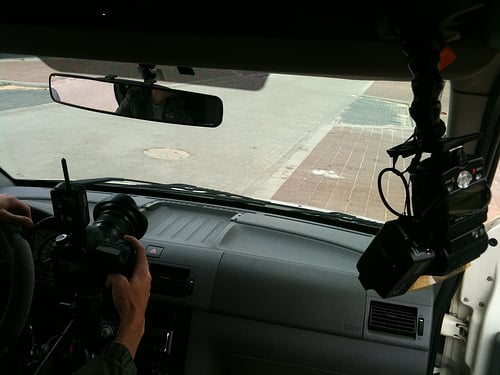 Last issue was focusing. Obviously, the glass with me not on it, will not serve as a great focusing aid (though we did give it a short try). We ended up using gaffers tape, and manual focus.

And here is how the sequence went: wipe glass, attach face to wind shield, shoot. Obviously the car had to be stationary, so blur was added later in post. 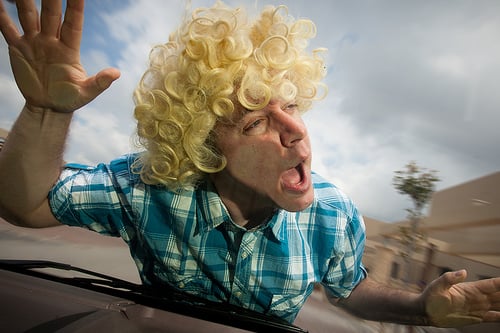 If you think this image is nice wait till mid May to see what we have in store for you :)