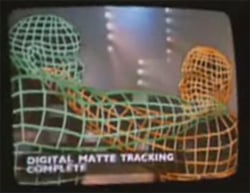 In one of the last scenes of one of Schwarzenegger’s best films, The Running Man, the evil producer makes a real time video swap between the face of a stunt double and the face of the (future) Governor of California.The technology is called Digital Matte Tracking or somthing.

They want it to look as if Schwarzenegger was killed. In 1987 it was thought impossible. I think it still it.

Here are some of the video and photography editing stuff that were invented since then. Evenly impossible and evenly impressive.

This technology is nothing short of outrageous, unless of course you are a movie star. Think those abs are real? Think again.

Watch the clip below. It was shot with a Canon 7D and applied a Twixtor effect in After Effects. Yea I agree it is not “cheap”, but also not that expensive, considering that a full blown Phantom Flex or Phantom HD GOLD will cost you a small castle.

Wouldn’t it be nice if we could make all the small and annoying stuff in our life disappear. This is exactly what Jan Herling and Wolfgang Broll from Ilmenau University of Technology did with their software. Removed a smartphone (and a fire hydrant and a bunch of other stuff)

Have you ever seen how in detective shows they “enhance” the image to discover hidden objects? I always dismissed this as writers trick, but seems like in some cases this can actually be done using a method called dual photography. If you don’t care about the science bla bla jump to 4:15 for some magic.

If you’ve ever taken a great shot only to discover that it was poorly focused you are not alone. It seems that but using about 100,000 lenses simultaneously, that frustration can be removed with a technology called Plenoptic Camera.

And of course we have our good old image enhancement. Or at least that’s what Hollywood is telling us

« On Assignment – Smeared
Using Baking Powder As A Macro Tube »