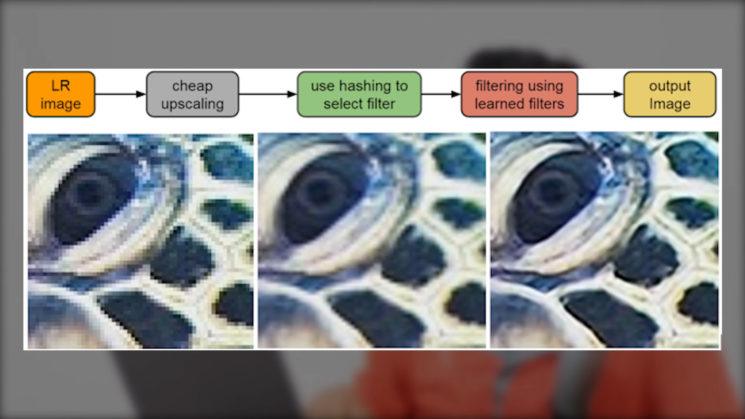 RAISR stands for Rapid and Accurate Image Super-Resolution. It’s Google’s prototype software which utilises machine learning to provide better quality upsampling of low resolution images. They first showed off the technology in November last year, but now Google have announced that RAISR has been implemented into Google+ for Android.

The point of the technology is to save bandwidth. Many mobile users have fairly limited bandwidth. Either they have low limits, or it’s just slow. Google see RAISR as an option to save bandwidth. The idea is to scale down the images before sending out. This means they’re smaller and easier to send. Then RAISR blows them back up to their original size on the receiving end. And it wants to do this with the minimal of impacts on quality.

Google say they’re currently applying the technology to more than a billion images per week. They also say that it’s allowed them to use up to 75% less bandwidth per image. Assuming the resulting quality can keep up with viewers eyes, it’s pretty amazing. This video from Unmesh at PiXimperfect goes over the basic process of how RAISR works.

The system uses machine learning. Essentially, it looks at pairs of images, one low resolution and one high resolution. When it’s “seen” enough of these images, it learns how things scale down, using edge detection. So, it can make a fairly good guess as to how things should look when scaled up.

The principle sounds very similar to the obscured facial detection technology we posted about a little while back. Except, RAISR actually attempts to recreate that missing detail. It sounds like pure fantasy. Like something straight out of CSI. But it’s not.

And now it’s here in, on your Android phone. At least with the Google+ app.

While the bandwidth savings are an obvious advantage, it does have potential issues, though. I’ve seen a number of photographers already worried that people may become more likely to steal work. If somebody can get a relatively low resolution image from your website, scale it up, and get a decent quality print, then they’re unlikely to buy.

Of course, the simple answer to that one is to not upload any images that haven’t yet been paid for, at least for client work. Also, the technology isn’t quite there yet.

Do you use Google+ on your Android device? Have you had the chance to compare the original shots vs RAISR’d images side by side? How does the quality compare for you? Is it good enough? Or does it still have a way to go? Let us know in the comments.