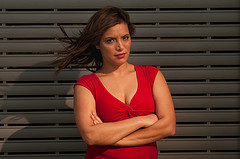 A while back when I made a huge career move and quite on the high-tech job, I set a goal of developing a photography business. I did warn you about the occasional “on assignment post” and this is just one of those posts.

At the place where I live there is a dance class for kids 4-16 years old. The manager of that class wanted some pictures to provide the local newspaper for an upcoming article. We talked and decide to take the pictures at her house where there is a nice decorative brick wall. This should eliminate the need to battle the harsh sun on one hand and provide both indoor and outdoor locations on the other.

Ever had that conflict with a subject? They know they need to have their picture taken, but they tell you that they “look bad” and “hate having their picture taken”. So they’ll pose, but still be very camera aware. This is just the thing that was going on in this session (I am always surprised when good looking people are so camera shy). So we talked quite a bit while I was setting the lights. Actually, we kept talking a bit even after I was done setting the lights. This is how I learned that Calanit’s mom was one of the famous dancers a generation ago and this is how Calanit got into the dance business, it was all around her while she grew up. 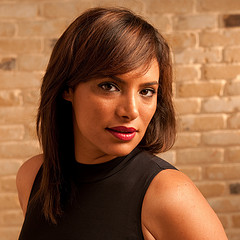 I came equipped with 3 Nikon Speedlights, 2 bazooka light packs, 1 “big” light stand, a Nasty clamp, gels and some CPU Cooling gridspots. I am still not 100% sure about my on location gear list, but those seems to cover most scenarios.

My plan was to light Calanit with a shoot through umbrella for key. We got quite a bit of contrast so Calanit moved a few steps to the left which got her closer to a white wall. Kill me if I had ever seen a more conveniently placed reflector.

Calanit has a great tanned skin and I used  a 1/8 CTO gel to bring this color out.

The brick wall backdrop was lit with another SB, this time gridded (and gelled with a full CTO). 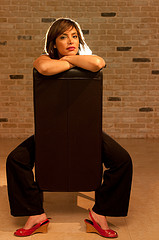 Calanit did not feel all that comfy with doing any dance poses so we settled on a chair photograph – the idea was to bring a different pose while she still felt 100% comfortable.

The key lighting here did not change. However, The light coming from the single umbrella did not provide details on the chair and Calanit legs were left almost completely at dark.

Now to make the legs pop out and add some details on the chairs back I added a third SB gridded and pointing towards the chair legs.

We added a bit of separation in the form of bare SB behind her (hidden by the chair).

For the last picture we went outdoors. I was morning so we headed to the western side of the building where there will be shade. We were lucky to have some wind to give us a different, more naughty look. more about this in a bit.

For this shot I used a CPU cooling gridspot, I love those little attachments as there are pretty cheap compared to the Honl alternative. (About $6 each) and the look of them is polished enough to a client (not that Calanit cared if I used coroplast, she was pretty cool about the whole lighting thing).

This photograph was the reason I brought the bigger lightstand. It will enable me to go pretty high and the added weight should provide more stability, though I did not anticipate the strong wind. 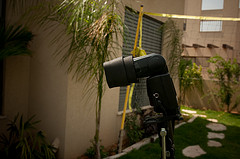 I mounted the SB on the big light stand and placed a gel and grid on it. The nice thing about the Saxons is that they can be stacked (as seen on left) to provide tighter beam. So I stacked them.

The wind did good to Calanit’s hair, while the Light from the Nikon SB helped direct attention to her face against the blinders.

There is a very good Strobist reference for this kinda setup here.

The outcome of this shoot was OK, however, I learned two valuable lessons. 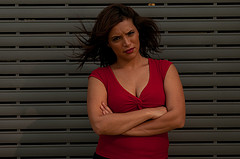 Lesson 1 – I’ve been working with the Poverty Wizards for a long time now, and did not mind the occasional misfire. I hacked them, modded them and took really good care about their batteries. But lately something has changed between us, They just don’t pop as they used to (see image on left). The low cost can no longer justifies the amount of misfires that I am having anymore. As the image on the left will indicate. I am considering a change very positively. PocketWizard and Elinchrom Skyport are the two obvious options. If anyone knows of another options to consider, I’d love to know.

Lesson 2 – Wind will knock your heavier lightstand, even if it only carries a Nikon speedlight. This was no umbrella, softbox or any other sail-resembling modifier – just a gridspot. Still the wind knocked it down. On the grass (thank you Karma). Happily the flash came down unharmed. But, a sand bag will now go on every lightstand even at the slightest wind. This is definitely a +1 for strobes against big monoblocks, as I doubt any monoblock would have survived such a fall.