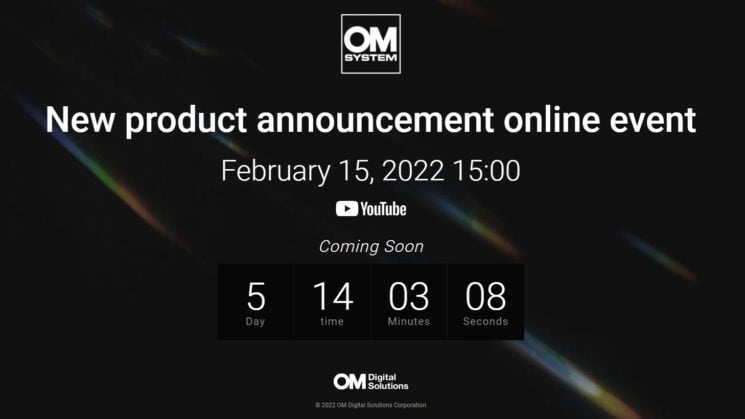 OM Digital has confirmed that there is a product announcement coming on February 15th beginning at noon EST (5pm UK time) for a new camera. They’ve been teasing a new “wow” camera for a little while now and this year marks the 50th anniversary of the original and legendary Olympus OM-1. So, it seems like as good a time as any to launch the first powerful camera under the new OM System brand.

The timing is quite interesting, coming just a week before the announcement of the Panasonic GH6 on February 21st (or 22nd, depending on where in the world you live). And while information on both cameras is very limited, they seem to be on a very similar level, they seem to be targeting a similar audience with some very similar video specs if the rumours are true. Except, the OM might be significantly cheaper.

According to the rumours so far, of which there aren’t many, the camera is actually expected to be called the OM-1. It’s an interesting, if not slightly confusing name, given that Olympus already released an OM-1 50 years ago. It’s certainly going to make searching the used market a little more tricky. But “OM” is the company’s initials now, too, and this will be their first new camera release since taking the reins from Olympus. So, in that sense, OM-1 makes sense.

When it comes to the specs so far, we don’t have a lot to go on for either the new camera from OM Digital or the Panasonic GH6. A few bits of info were teased at the GH6 development announcement last May, but not a lot. And for the OM, it’s all just rumours right now.

The OM camera is expected to have “improved AF tracking” as well as “astro tracking”, but improved over what is unclear. Panasonic hasn’t said anything about the sensor or resolution, but given the fact that it shoots 5.7K video suggests it’s going to be at least around 25-megapixels (if it’s the standard 4:3 sensor). The OM camera, on the other hand, is rumoured to be a 20-megapixel Sony IMX472. This means that we won’t see video resolutions to match the GH6, with it only having a horizontal resolution of 5,280 pixels.

What is interesting about the Sony IMX472 sensor expected to be in the OM camera, though, is that it according to Sony’s spec sheet, it can shoot 2640×1318 resolution at 10-Bit at up to 469 frames per second. That means we could potentially see some pretty high 1080p record speeds for super slow motion. 1080p at 360-400fps wouldn’t necessarily be out of the question and would give it a distinct advantage over much of the competition – but I wouldn’t get your hopes up.

There’s no event scheduled on the OM System Japan YouTube channel, although there is a link to their channel on the countdown page. So, I expect there’ll be one coming when the timer runs out. You can see the full schedule of global events for the day in various languages here.

« Future Croatian Euro coin based on a stolen photo, photographer claims
How to digitise your signature and watermark your photos with a one-click action in Photoshop »