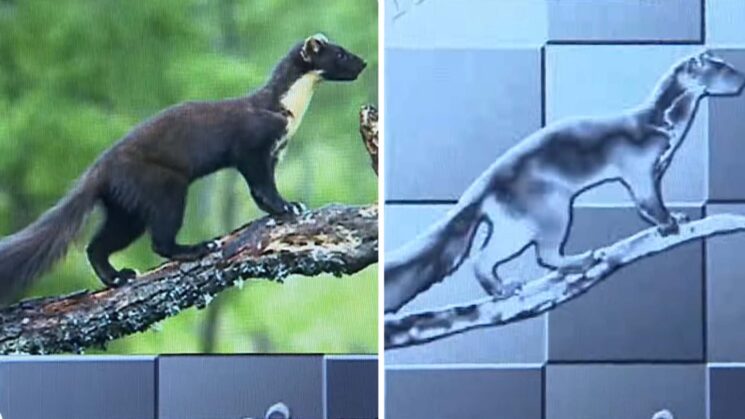 In an ideal world, anyone in the creative business knows that you can’t just rip off someone’s work, edit it a bit, and present it as your own. But this is not an ideal world, as Scottish photographer Iain H. Leach recently experienced. He claims that a Croatian designer stole his photo to design a future Croatian Euro coin – and he even won a massive monetary prize for it.

I learned about this scandal from my friend in Croatia, so I decided to discover what it was all about. Well, since Croatia will switch to Euro soon, the Croatian central bank (HNB) launched a competition for the design of the future coin. The winning designs were introduced last week, and solutions by Stjepan Pranjković took first and second place.

However, some local media outlets quickly noticed the similarities between Pranjković’s design and Leach’s photo of a European pine marten (“kuna” in Croatian, which is also the name of the country’s currency). They began mocking the design and the entire selection process, adding that the future Croatian €1 coin might be a case of copyright infringement.

The suspicions were confirmed when someone dug out Pranjković’s posts in Facebook groups. In these posts, he asked if it was possible to “take a cutout of a photograph from Photoshop and open it in Illustrator or maybe some other program.” Further explaining why he needed it, Pranjković added that he was “designing some coins” and needed to “apply lighting effects on a photo to get the metallic look.” Yikes.

Not surprisingly, the scandal broke out and the whole story quickly hit all the news here in the region. Of course, the people of Twitter notified Leach, with some of them saying they hope the photo was at least bought from a stock site. Even if it was, I’m not sure you can use it like this, but correct me if I’m wrong. Leach responded: “Thanks for letting me know. Not sure what I can do, maybe they’ll send me a free coin.”

Thanks for letting me know. Not sure what I can do, maybe they’ll send me a free coin.

According to multiple sources, Pranjković has been unavailable to the media over the past few days. However, the most recent reports claim that he sent an email to the central bank on Monday, withdrawing his proposal and apologizing. Still, he reportedly neither confirmed nor denied that the photo was stolen.

“I have had no intention to hurt anyone’s feelings and therefore I apologize to everyone, particularly to the Croatian National Bank (HNB), the Croatian government, and the Croatian public,” Pranjković wrote in the letter as N1 reports. He withdrew from the competition “in order not to complicate the situation any further by possible uncertainties surrounding the matter.”

The central bank said that it would check the allegations and decide what to do. After Pranjković withdrew his solution from the contest, HNB annulled the results and started a new one. According to Radio slobodna Evropa, the second and third place winners weren’t withdrawn from the contest.

Painter Found Guilty Of Plagiarism For Painting A Photo. Claims Format And Color Contrasts Are Different