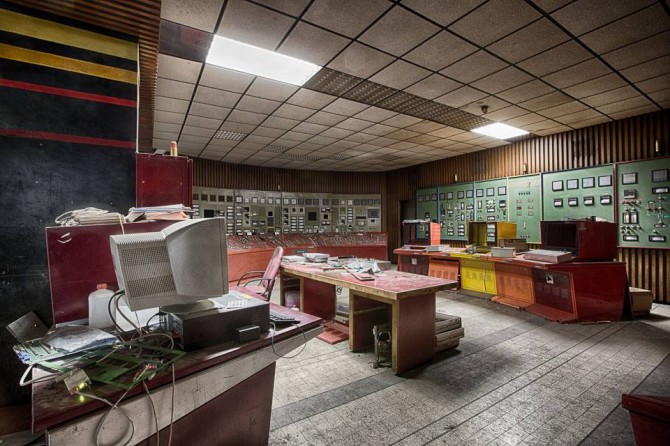 While Urban exploring (also referred to as Urbex) provides both wonderful photos for the viewers and a thrill for the photographer is it not always fun and games. Urban Explorer The Other Side (full name with the system) just shared a story with us about getting detained, almost arrested and practically being banned from doing any Urbexing in France or he will get in the slammer for a year and have to pay a fine of 15,000 Euros.

While exploring a partially abandoned factory in France, TOS got into the following uncomfortable situation on an early Sunday morning.

The lights were still working no one to be seen… But we were so wrong this time.

There was a strike going on that day, we didn’t know that. So a lot of activity and we got busted. Part of the game I guess. We were spotted by 10 workers (which shouldn’t be there that day) and they had us cornered. Oops…

Security took us away and police was called… Before police arrived about 15 other workmen joined us. Police wasn’t too happy this time.

The workers were very friendly once they knew we were photographers. They told us it was dangerous to walk there (like Always). The police at first was strict and polite. Later they understood our passion and they knew we didn’t plan to steal or break anything. But somehow it got to the ears of a prosecutor. He called to the local police and they had to put us in the system…Here is the weird thing, they tell us that against stealing gypsies and vandals they can’t/won’t do anything, but with us being in the system now, they had to follow protocol.

To make a long story short, If we get caught again in France in a place we shouldn’t be the next three years, we get a fine around 15,000 euro and possible 1 year cell.

Here is the wrap up for the story:

We got out of the police station, got in our car… looked at each other for a brief second and we immediately drove to our next spot… with a brief stop at mcdonalds

So remember that while urbexing can be fun and exciting, there is a real risk involved.

The Other Side has a great facebook page with lots of great urbexing from all over the world (though I suspect France will not be featured anytime soon), give him a shout if you like the story.