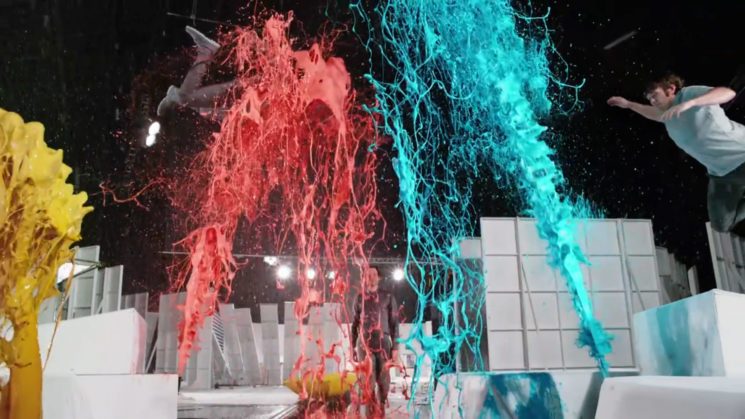 For American rock band OK Go, boundary pushing music videos have become the standard. They’ve done the long one-shot takes with crazy optical illusions, shot with a massively co-ordinated cast of dancers, and they’ve even levitated in zero G. Now, they’ve done it again with their latest music video for new song, The One Moment.

The entire video, again, is shot as a single take. The main action in the video took only took 4.2 seconds in real time. After that, it bounces back and forth between real time for a few seconds, and then back to super slow motion with people flying through the air over fountains of paint. It’s a ridiculous video, and the amount of planning that must’ve gone into it to get it right first time just doesn’t bear thinking about.

They’ve been posting teasers for a week or so leading up to the release via their YouTube channel and Facebook page. Normally, such band teasers are quite boring, but you know when OK Go is posting them, something special is on the way.

Shooting videos at faster framerates has been common in music videos for good number of years. Often, though, it’s shot at 60 or 120fps, with the music played back really quickly during filming. This means that when it’s played back at a regular rate, the singer’s lips sync with the tune while the world around them is slowed. The One Moment takes this to the absolute extreme, though.

This kind of extreme was also used by Siska at the beginning of last year for their Unconventional Rebel video. Their video was shot in a 5 second take at 1000fps. This brought it to 3’30” when played back at a normal framerate. Unlike OK Go, though, many of the objects seen flying through the sky (and even a few of the people) are CG and not really there.

In the past, OK Go have posted behind the scenes videos for some of their other music videos. True to form, we have another one for The One Moment, too.

This video just goes to show how important effective planning can be. Of course, not all of our shoots are as complex as this one. In fact, I would wager that almost none of our shoots are as complex and elaborate as this one. But, even on a simple shoot, planning in advance can make things go much more smoothly. It all but guarantees you’ll get the results you expect.

What did you think to the video? What are some of your favourite music videos and techniques that have come out recently? Does the behind the scenes video give you some ideas for your own work? Let us know in the comments, and if you’ve done similar, show off your work!

How The Insane Bar Scene From “The Other Guys” Was Shot