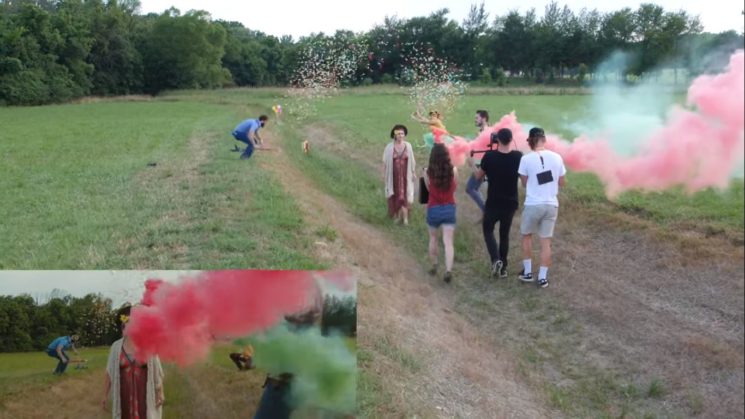 We’ve featured quite a few creative music videos here on DIYP, and the latest one that grabbed our attention was shot for a song There’s a Weight by Lake and Lyndale. Other than being filmed at a single take, the whole video was also shot in reverse. The singer Channing Marie had to learn the lyrics backwards, and the result is a trippy, fun video with perfect lip-synching.

The video features Channing walking and singing, while the guys from the band throw paint, confetti, feathers and water on her – backwards. In reality, she was singing and walking backwards, and the guys were doing everything forwards. Sounds trippy, right? They say it sounded trippy to them too when they first heard the director’s idea.

The director of the video, Ben Boutwell, says that he’s always wanted to film a video like this. The band agreed with him to give it a shot, but there was a lot of work to do before filming. It was especially challenging for Channing, who had to learn the lyrics backwards. If you’ve ever played a song backwards, you know that it sounds like complete gibberish (or does it?!). The singer spent about four months learning the lyrics, and then came the shooting day.

Ben explains that they set up folding chairs with numbers on them to mark the places where props are going to be. This was important so that everyone could grab their props at the right time as Channing walks and sings in reverse. They did a few test takes, adjusted the props and started filming. Two minutes after hitting the record button – it started to rain.

The rain delayed the shoot for the next day. However, it turned out to be a good thing. This gave everyone a chance to gather around, watch what they’d filmed that day, and figure out what they could improve. The very next day, the crew filmed the video in a single take. Channing says that it went a bit more smoothly, but it was still chaotic as the guys were running around her, throwing stuff, and she was trying to focus and sing the song backwards. Still, despite the challenges, it seems to me that they had so much fun filming this! You can see how it all went in BTS videos below:

The idea of backwards videos certainly isn’t new. There’s Breezeblocks by Alt-J, The Scientist by Coldplay, F.E.A.R. by Ian Brown, to name just a few. Serbian band Artan Lili also has an awesome backwards video for an equally awesome song Jutro (Morning). Still, although the idea isn’t new, I find it impressive that the singer learns the whole song backwards and that everything is filmed in a single take.

« The pros and cons of shooting both film and digital for street photography
Modern cameras: how they make it harder to take a bad photo »