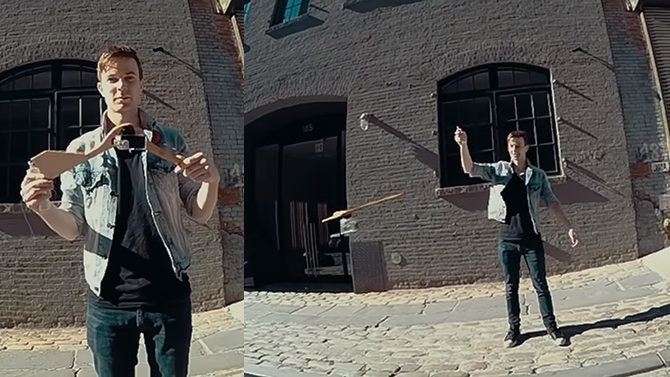 Adding some motion to the camera is one of the simplest ways to give your footage a bit of interest.  Today, we have more options than ever when it comes to how we can get that motion.

For Matt and Kim’s latest music video for their song, Let’s Run Away, they decided to try something a little different using an evolution of Nicolas Vuignier’s Centriphone technique with a coat hanger and a GoPro.

A pair known for trying to push the limits with their music videos, they certainly pushed the limits of their budget with this one.

Now, you can’t just tie some wire to a coat hanger, strap on a GoPro and away you go.  Like the Centriphone, you need to stabilize the “rig”, so that your camera’s pointing the right way and not just wildly tumbling out of control.

So, a fin is added to one side of the hanger, turning it into a sort of “tail”, which keeps it smooth and level while spinning. 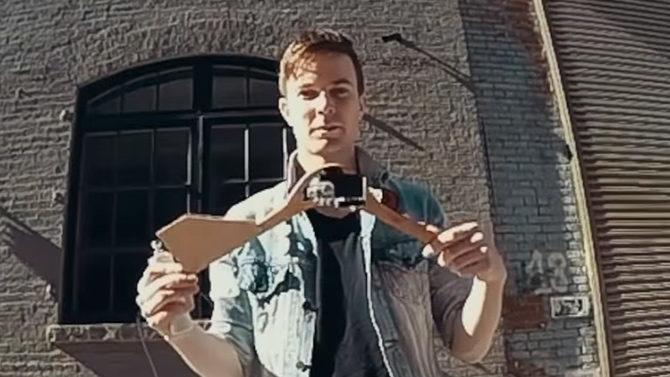 In an interview with Fast Company, the duo said that actually getting it to work took some trial and error.

Doing an initial test we realized the more movement and energy was in the shot the better it would look.

We shot a little of Kim dancing as she normally would and it just fell flat. She is dancing so aggressively in the shots that ended up in the video, she’s basically moshing with herself.

When you’re shooting a camera at 240fps and playing it back at regular speed, you’re slowing time down to about 10%, so it makes sense that you’d have to move pretty quick to get any kind of action in the final footage.

It’s a fun little video, and certainly demonstrates the principle well.  Just be careful you don’t hit anybody with it.

We’d be spinning this coat hanger contraption as fast as we could. I swear it could take an eye out, and people would just not even stop for their own safety.

When they were almost in the radius we’d have to quickly just swing the thing into the ground to stop it.

Update : Matt and Kim also shared a short behind the scenes video going into a little more detail about how it was made, and the techniques involved.

Have you tried the Centriphone technique?  Have you adapted it to work with other cameras or work in a slightly different way?  Let us know in the comments.

Thanks to the lockdown, the iconic zebra crossing from “Abbey Road” finally gets a fresh coat of paint