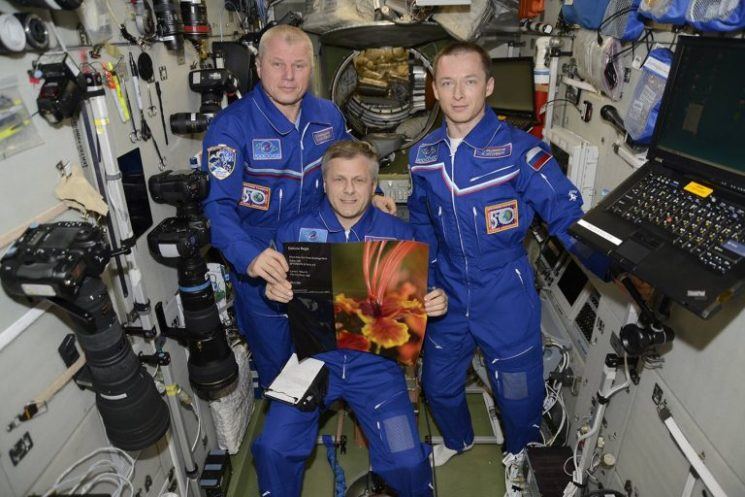 Normally when we hear about photography on the space station, it’s photographs made there. It’s scenes looking back at earth through the windows of Cupola, the ISS observatory. Incredible views of the earth, stars, auroras, or crazy timelapse. This time, though, it’s not photos coming to the earth from the ISS. They’re going to the ISS from earth.

Playing host to its first photography exhibition, the ISS now houses five images from Indian photographer Dr. Hersh Chadha. Printed on vibrachrome by Duggal Visual Solutions, these five photographs are intended to reconnect the astronauts with the Earth.

Dr. Chadha’s began lobbying for the exhibit 15 years ago. But it wasn’t until connecting with Russian cosmonaut Col. Valery Korzun  that he was able to make it happen. Col. Korzun arranged to have five of the photographers images on board ISS Expedition 49-50 in 2016. But when the expedition returned home, the images remained on the ISS.

At the welcome home event of the ISS Expedition 49-50 team in Star City, Moscow last month, Dr Chadha was an honorary guest. Dr. Chadha put together a video to document the entire process.

The images are each of different types of flowers, something that Dr. Chadha believes symbolises the beauty of life. He couldn’t give them real flowers, so he gave them photography. And they are quite wonderful.

Obviously the ISS only has so much room, but hopefully this isn’t the last photography or art we see sent up there to remind its residents of home.

If you want to see more of Dr. Chadha’s work, head on over to his website and Instagram feed.

« This DIY periscope makes the Sony A6500 the perfect vlogging camera
Nikon officially confirms: “we are developing a new mirrorless camera” »