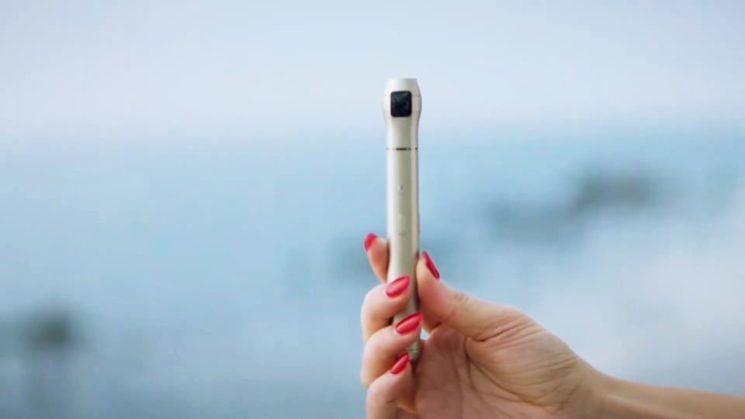 A new consumer-grade 360° camera is coming to the market soon from Vecnos, a new startup spun out of Ricoh. While it looks like it will wipe your memories (Men in Black, anyone?), it actually saves them in the form of 360° images. According to Vecnos, this little pen-shaped camera will make it easier to capture your 3D memories and to share them on social media.

Although there are quite a few 360° cameras on the market, Vecnos aims at an average consumer, not professional creatives and content creators. So, this camera could be a step forward to making 360° content mainstream. Or more common at least.

Vecnos still hasn’t shared too much detail about the camera. For now, we know that it’s pen-shaped and pretty stylish and that it kinda looks like a Neuralyzer from Men in Black. It has a four-lens optical system, with three lenses on the side and one on the top. The camera is accompanied by the Vecnos app, which allows users to easily enhance and share their images and videos on social media platforms. According to Vecnos, they want to inspire a new generation and “reinvent the selfie” for younger consumers.

There’s still no word on the price or the exact launch date. But for now, we know that the 360°camera and the accompanying app will be available in 2020. In the meantime, you can see the camera in action in this short promo video:

« This Norwegian forest cat has a bigger Instagram following than you
A Tale of Two 24-70’s: Nikkor S and G »