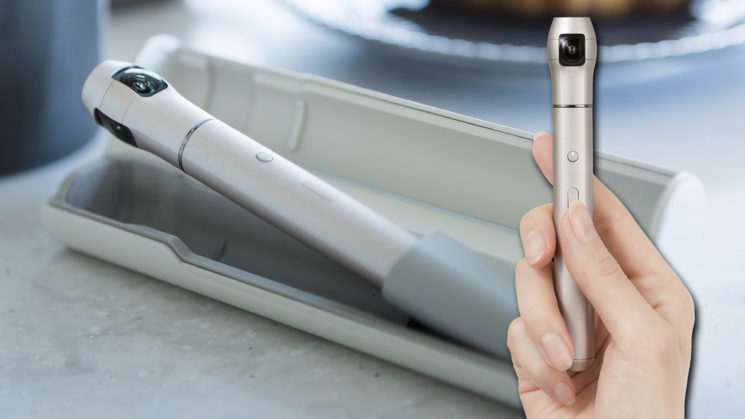 Vecnos, the company that spun off from Ricoh, has now finally announced the availability and complete specifications for the IQUI 360° camera they teased back in March. While the design is very reminiscent of MiB’s neuralyzer, this one’s designed to capture your memories, not erase them.

IQUI (pronounced “ee:kwee”), utilises the company’s IQUISPIN app for iOS and Android to make “shooting and sharing 360-degree content fun and easy”. Its small stature allows it to be easily portable, fitting in a purse or pocket just like a pen meaning you’ve no excuse to not have it with you.

The IQUI uses a quad lens system (three around the sides and one on top) to help increase the overlap between each camera’s view and provide a more seamless stitch when it comes time to view your content. It lets you shoot 360° photos and short video clips of up to 30 seconds. It’s not designed for creating your next immersive masterpiece, just for documenting your daily life for yourself or maybe social media.

There are only three buttons on the IQUI: Power, shutter and mode (to flick between photo and video). The video files are mp4, which is presumably h.264 although they don’t mention the codec, although the bitrate is 45Mb/s with a resolution of 3840 x 1920 at 30fps. Stills are shot at 5.7K resolution (5760 x 2880) and I think we can expect that they will be jpg. It’s unlikely we’ll see DNG. But given the market it’s aimed at and the intended use case, I don’t think it really matters all that much. 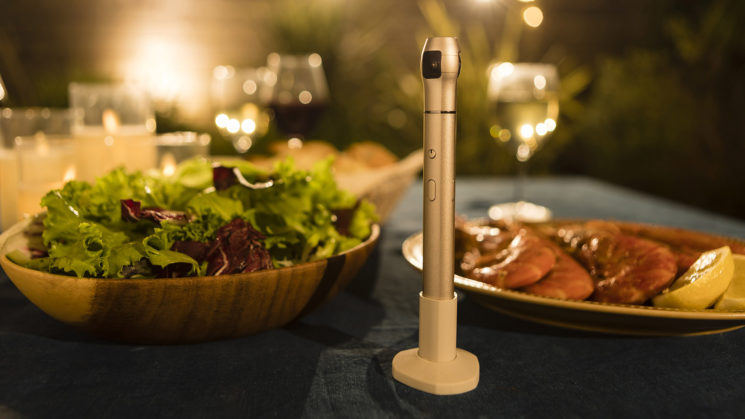 The IQUISPIN app for iOS and Android actually works with footage and photos from any 360° camera, although some of the app’s features will be exclusive to IQUI camera users, such as the ability to add filters and remove watermarks.

I have to be honest, $299 seems a little much for what it is. I’m sure it’ll sell well, but for many who might already own the Insta360 ONE R or GoPro MAX who were thinking about one of these, they might’ve expected it to be closer to $199. Will you get one? And do you have to wear shades while using it?

Nope, this device from Vecnos doesn’t wipe your memories – It captures them in 360°

« This timelapse packs eight years of Singapore’s growth in just five minutes
Profoto to announce a new A10 speedlight next week? »