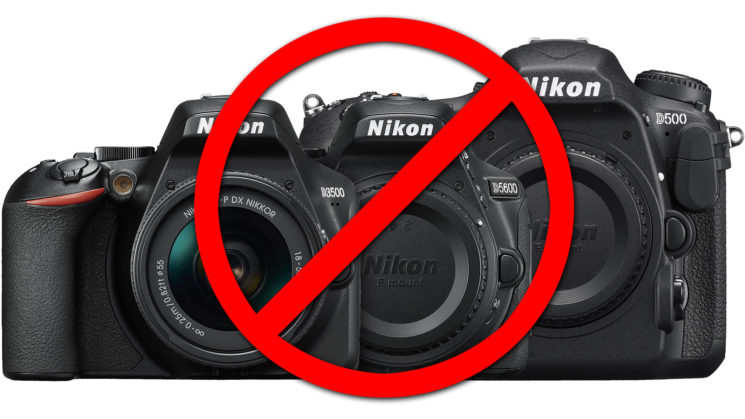 A post has popped up on Nikon Rumors suggesting that Nikon is killing off some of their most popular DSLR lines. Specifically, the D3x00 and D5x00 series along with their “Pro” line of DX bodies, currently the Nikon D500. They say that they will “most likely” be replaced by mirrorless models.

It’s a bit of a bummer, although not entirely unexpected, really, and this transition seems mostly limited to their crop DSLRs at the moment. What does surprise me, though, is that they’re not killing off the D7x00 product line.

The list posted by NR states that the following three models will not be replaced – at least, not by a new DSLR.

But that the following models will see a DSLR replacement.

The D5 is an obvious choice to keep going, given the number of sports, wildlife and other shooters who rely on Nikon’s highest end line of DSLRs for daily use. They’re solid workhorses that have proven themselves many times over.

This is why  I’m surprised they’re ending the Pro DX bodies with the D500. They’re also in use by a high number of photographers that rely on that form factor, build quality and reliability to earn their daily bread. Are they going to want to switch to a mirrorless with a comparatively much lower battery life? Or is it just that Nikon feels they’ve taken the tech as far as they can with a DSLR and there’s no logical replacement that would be as revolutionary an upgrade to the D500 as the D500 was over the D300s? Or the D300 over the D200? Or the D200 over the D100?

The fact that they’re ditching this but apparently planning to continue the D7x00 series seems a little odd. Unless Nikon has the urge to give consumers dual card slots back again. I mean, pretty much all they could do with a D7500 replacement model is turn it into a D500, no?

The two lowest end bodies… The D3500 is a natural choice to evolve to mirrorless. Nikon wants to grow its market share in the mirrorless sector and introduce new photographers to their mirrorless lineup, so they’re going to want to get them in early at their lowest entry level bodies. This, to a point, also applies to a D5600 successor.

The D5x00 series offers some nice advantages over the D3x00 series, like 14-Bit RAW over 12-Bit, custom colour profiles and the obvious flippy out LCD. One can only hope that Nikon carries on the D5x00 tradition of a flippy out LCD with whatever mirrorless camera they choose to replace it with. I’ve been holding onto my D5300 as a vlogging camera for so long just waiting for them to release a D5x00 series that shoots 4K video. If they don’t produce a mirrorless camera with a flippy out LCD, I might just have to buy an EOS RP.

Of course, given that the Z6 and Z7 do only have one card slot, bringing out D750 and D850 replacements now would allow Nikon to milk those product lines a little longer before releasing dual card slot upgrades for the Z6 and Z7.

How true the rumour is… Well, that’s anybody’s guess, really. NR hasn’t cited a source. But whether it’s true or not, it’s interesting to speculate about where Nikon may go in the future. Canon, too, for that matter.

What I’m really interested to see is if Nikon will go the same route they did with their DSLRs, having APS-C and full frame mirrorless cameras use the same lens mount or will they split them into completely separate hardware lines up like Canon did with the EOS M and EOS R product lines?

And if Nikon does keep them hardware compatible, will Mirrorless APS-C users be expected to buy full frame lenses? Or will Nikon release APS-C Z mount lenses? And will they work on full frame Z mirrorless cameras in crop mode, as happens now with DX lenses on FX DSLRs?

Only time will tell, but as I said, it’s an interesting discussion to speculate about.

Naturally, there’s no word on the Nikon Df. And the D600/D610 line is already dead. What would you kill off and what would you keep?