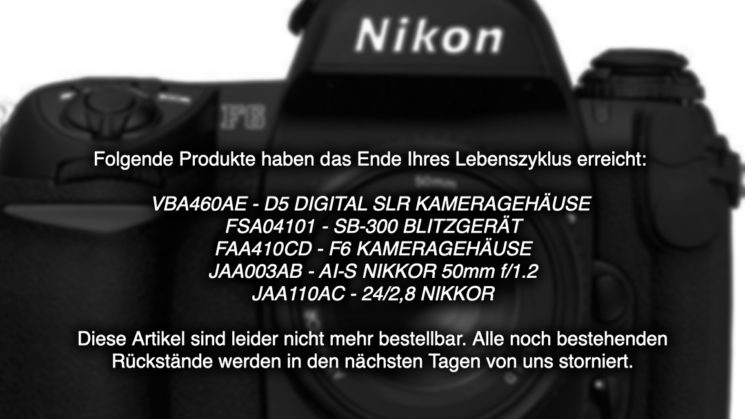 The following products have reached the end of their life cycle

Unfortunately, these items can no longer be ordered. All outstanding arrears will be canceled by us in the next few days.

Interestingly, the Nikon F6 isn’t listed as discontinued elsewhere in the world yet. B&H still lists the F6 as available for $2,599, although they say they have none in stock with “More on the way”. So, maybe it’s just discontinued for Germany and some other parts of Europe. But I think more logically, there are just more of them lying around in various warehouses throughout the USA that still haven’t been sold yet. 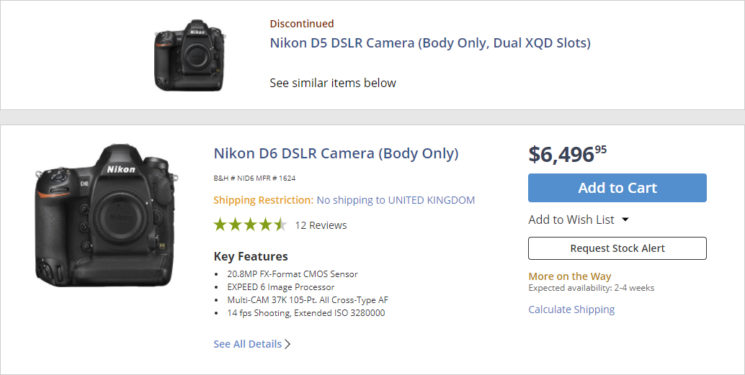 The Nikon Japan website tells a much more telling story, though, with a high number of AF-S DX lenses also being listed as discontinued, including many of the popular and higher-end ones like the AF-S DX Zoom-Nikkor 17-55mm f/2.8G IF-ED (also still listed as in stock and available at B&H and Amazon).

This suggests that not only has Nikon finally let go of their grip on film but that they’re also abandoning the F mount DX system possibly sooner than many had expected as well. Does this mean then that we might have some true D3x00, D5x00 and D500 mirrorless replacements on the way from Nikon sometime soon? Not to mention a slew of new Z DX glass to replace all this stuff that’s being discontinued?

I suppose only time will tell.

It’s likely that Nikon and retailers will simply sell off the remaining F mount stock and push new users towards Z DX systems going forward – the Nikon Z50 doesn’t seem completely terrible – with the eventual goal of leading those customers up to their higher-end mirrorless offerings as their experience and needs grow.

As much as Nikon might want to, it makes little sense to continue two separate competing mount systems.

For now, it looks like many of the discontinued items listed on both the notice sent out to retailers and Nikon Japan’s list are still available if you choose to look hard enough, although they may not be around for long.