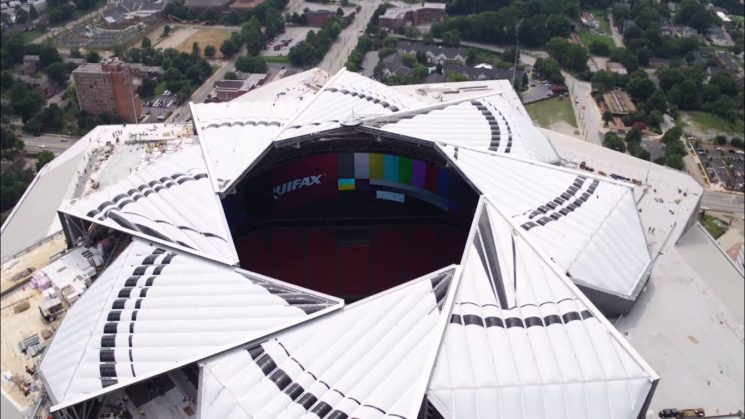 Football club Atlanta Falcons has a brand new stadium. The designers say it was inspired by Roman Pantheon, but as photographers, we found something else more interesting. The stadium’s retractable roof is inspired by camera aperture, and it opens and closes just like the aperture does.

The new Mercedes Benz stadium was designed by HOK. Their design principal, Bill Johnson, said to Architectural Digest: “I imagined a circle of light appearing over the field and growing like a spotlight, the same way the light enters the oculus of the Pantheon in Rome. From that idea grew the structure, skin, and seating bowl configuration, so all design elements supported this big idea of bringing the energy and focus to the center of the stadium through the roof’s dramatic design.”

The roof has eight aperture-shaped petals that can close and lock together to keep the water out. The roof can open and close in under eight minutes, and each aperture is covered in translucent fabric. This way, the light can come in even when the roof is closed.

It cost around $1.5 billion to build the stadium. Although it’s not the first non-photography thing to be inspired by the aperture – it’s certainly the most expensive one.

« Field Test: Loupedeck photo editing console
20+ gorgeous backlit rainy photos and a tutorial on how to take them »