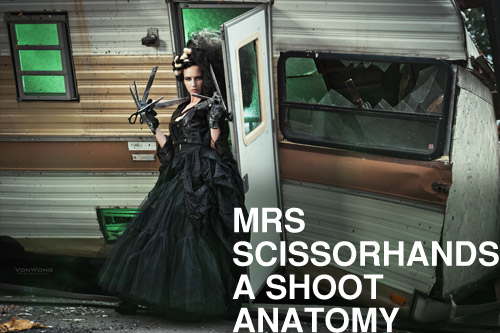 Benjamin Von Wong is a commercial and editorial photographer based in Montreal. In this post we try to get inside his brains with some Q&A about a recent concept shoot: Mrs Scissorhands.

If you are just in it for the awesome lighting jump to the last part. If you want the whole enchilada, we start right after the jump.

Q: Hi Ben, can you tell us what was your inspiration for the shoot?

The concept actually developed around the idea of having our lovely model Joanie be an odd person standing out in a destroyed/abandoned location. While trying to figure out what sort of wardrobe we wanted, Sweeny Todd and Edward Scissorhands were two names that came up and things just flowed from there!

Q: The location is just perfect, can you tell us a little bit about the process of scouting for this location?

Actually the location in question was pretty much a random stroke of luck. I had gone over to Lilly’s (MUA) place for supper to plan for another shoot the week before and she was telling me how there had been a huge fire in the paper factory next door. I looked outside and knew that this was the location we wanted. Lilly assured me that she could get permission from the security guard. Turns out, we never managed to get a hold of the guy until the actual day of… Consequently, we were kicked out on two separate occasions the day of the shoot, once by security and once by the owner of the building next door. Thankfully, I had a couple waivers handy and through a series of negotiations we managed to get permission to shoot right outside of the site without actually getting permission to enter. 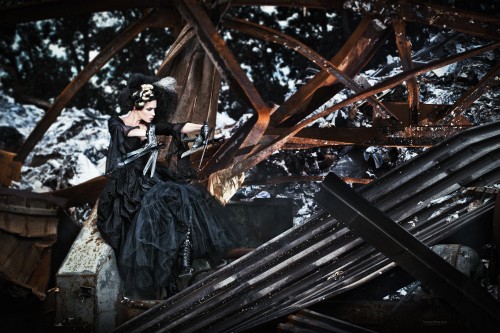 Q: Hats off to the talented team. I noticed that lots of your projects are big scale production. How do you assemble the crew?

Assembling the crew is a reasonably simple process, it just takes a long time to put together… and always comes with last minute surprises.

It starts off with an idea. In this case, the idea was thrown to me by the model, Joanie Darveau. I liked the idea, so the next step was to find the pieces. Critical elements were wardrobe, makeup, hair and location.

We pitched the idea at a couple hair and makeup people to gage interest and the results were reasonably positive and we followed up by attempting to find a date that fit everyone. This took a couple weeks of wrangling and finally we settled on a date. At this point in time, we had confirmed Kimberly Crane on hair, Joanie Darveau, model and myself, photographer.

Two weeks before the shoot date, my MUA backed out because she had a paid contract coming in so we replaced her with Lilly about a week before. I had an alternative abandoned location in mind with a guide, but since I had discovered the burnt building it seemed like a far better idea to shoot there since the site was due to be cleaned in a couple weeks so we moved the entire shoot a week before.

A couple days before the shoot, I threw up a cry for assistants on my fan page and collected Guillaume Briand, Nadia Zheng and Monique Guilbault to come by and help.

So overall… start to finish, it took about 2 months to put together from idea inception to creation… plus another month or so for the edits.

Q: And how does the schedule look on the actual production day (and the day before?)? 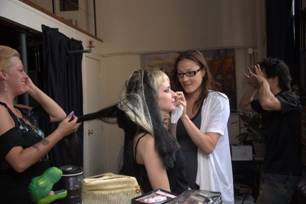 The day before, I was still confirming assistants. I had a huge production shoot the next day (over 15 people involved that will soon be featured on DIY Photography, courtesy of Eva Jinn Productions) and didn’t want to overlap assistants. It’s a zero stress situation though, I’m not quite sure how but assistants are the last thing I really seem to need to worry about. My fans are awesome and are always 1000% into the helping process.

On the day of the shoot, we all arrived at Lilly’s place for 9 AM. I arrived with a ten-pack of Tim Hortons coffee and 40 Timbits which I’ve found to be quite encouraging for my team. 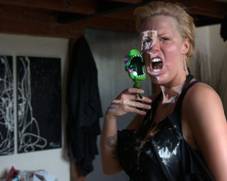 Once the model arrived, hair and makeup started their part of things. Some photographers are very particular on the exact look that they want to create… I usually take a step back and let the talent I collaborate with drive, and I pop in here and there with comments. While makeup and hair were taking place, I would chat up my assistants and get to know them better (both Guillaume and Nadia were first time assists), check out what wardrobe the model had brought as well as took a little time to go out and scout the location ahead of time.

Once all the pieces were more or less assembled, we headed down, prepared the setup while hair and makeup put on the finishing touches. By then it was about noon when we were ready to shoot.

Of course, the minute we started moving gear into the site, the first security guy comes by and informs us that we’re not allowed to shoot there. We managed to convince him to let us speak to his supervisor on the phone… and after a bit of wrangling back and forth (30 minutes of it actually), we got permission to shoot on the outside of the property.

30 minutes into the shoot, the owner of the building next door started screaming at us through his window and he comes down to confront us. We whip out a couple waivers which he seems semi content with and proceeds to invite us into his loft and try and convince me to rent out his lofts for future shoot… another 45 minutes of PR.

Finally, we get down to business and continue shooting for the next 2 hours wrapping up the shoot somewhere around 4PM. 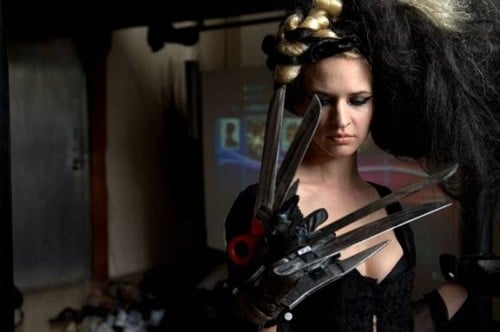 Q: Where do you source the amazing props?

We have a couple awesome costume stores in Montreal. Joanie found the dresses in one costume store while Lilly took charge of finding the scissorhands. The boots, we found the day of the shoot in Lilly’s shoe collection…nothing more fancy than that J

Q: Let’s talk about the gear. How do you decide what to bring along for such a day? 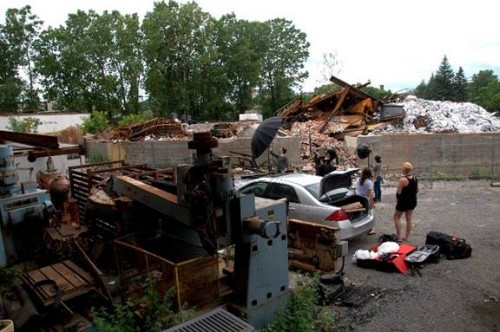 For shoots like these… I bring all my camera and lighting gear. You never know what the site’s going to toss at you so you want to be ready for everything. I own six speedlights in addition to 5 studio flashes (specifically 3 White Lightning’s and 2 Einsteins from Paul C Buff) Although that may sound like an overkill, speedlights are amazingly versatile small lights that can help create a variety of cool effects that studio lights may be simply too big for!

Q: and how did you end up lighting Mrs Scissorhands?

Let me go through each setup independently… each lighting setup is unique… I don’t have any quick formulas nor ratios… actually, I don’t even own a lightmeter. I just arrive, setup, test until satisfied and decide and improvise based on a combination of experience, intuition and feeling. For the sake of practice, I would recommend you readers take the time to guess how each setup was lit before checking out the setup shot… Practice makes perfect! 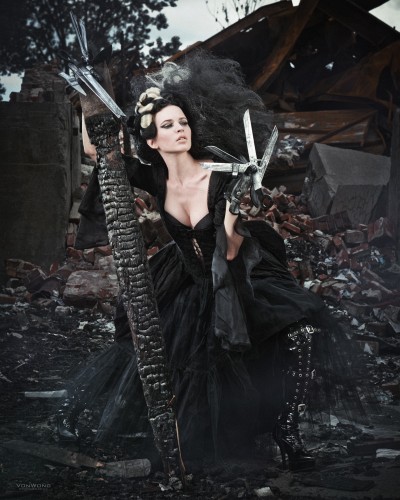 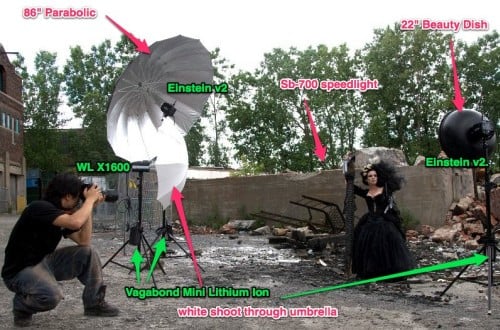 This is basically a 4 light setup where I had the Beauty Dish acting as the keylight on my lovely model’s face…. The parabolic and shoot through acted as a fill to fill out those blacks of the dress so they wouldn’t be lost in the shadows. For the final shot, the shoot through was actually brought closer and angled downwards to light the detail of the dress while the parabolic kept things directional to help textures of the wood especially.

An additional SB-700 speedlight (Amazon, B&H) was also brought in to help light the back of the hair of my model to separate her from the background just a touch. The whole thing had to be balanced with a variable ambient since the day was quite cloudy. The whole was triggered with the brand new Pocketwizard FLEX/MINI/MC2 triggers! (Amazon, B&H) 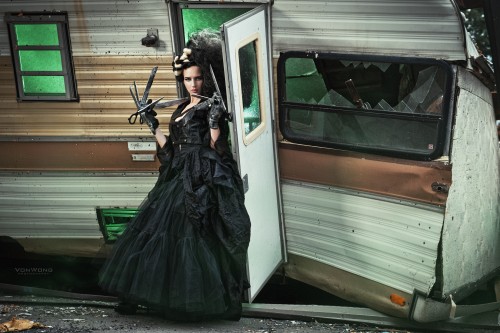 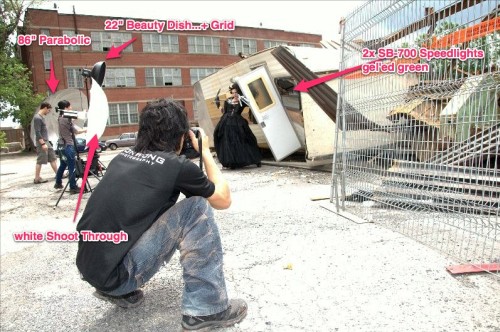 While waltzing around the perimeter of our compound we noticed this fantastic trailer that was completely demolished. Initial priority was to light our model in a similar dramatic fashion without loosing too much details in the clothes so we used a 22” Gridded Beauty dish to light up the face. A white shoot through once again served as soft fill on the dress while the 86” parabolic gave the general light direction to our shot. What really made this shot interesting though was the two SB-700s we through inside of the trailer to bring the shot to life. 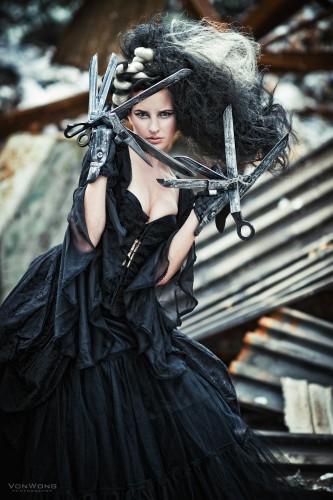 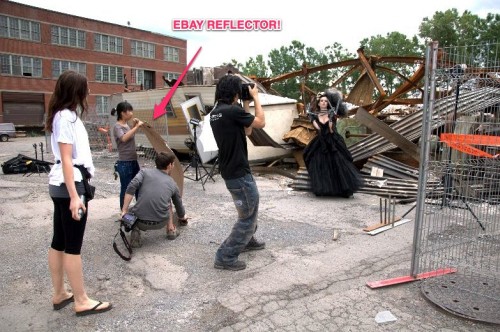 Definitely the simplest shot of the whole set… nothing fancy just a cheap 5-in-1 “EBAY” reflector combined with the Nikon 85 f1.4G (Amazon, B&H) for some creamy bokeh magic. What’s there not to love? 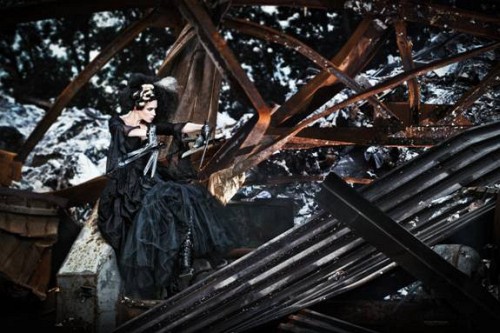 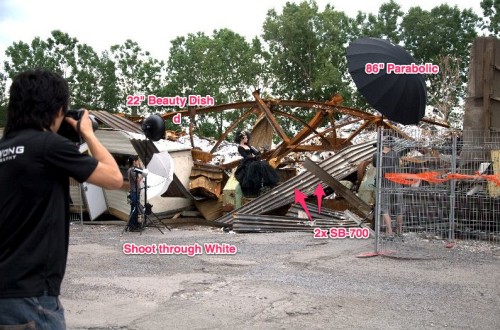 Similar lighting to the others with the 86” parabolic acting as directional fill, the white shoot through acting as soft fill and the Beauty Dish as ley on the front of the face. In addition we had two SB-700s hidden underneath the entire structure to add some sort of creepy confusing lighting to the metal structures. Perhaps not the ideal lighting to make things look realistic but I like the supernatural feel that you can’t quite grasp a hold of. Used my 70-200 f2.8 (Amazon, B&H) for this shot to compress perspective as best I could. 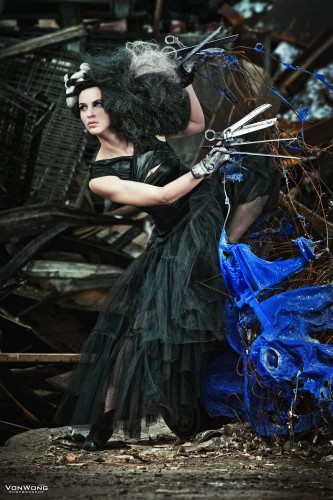 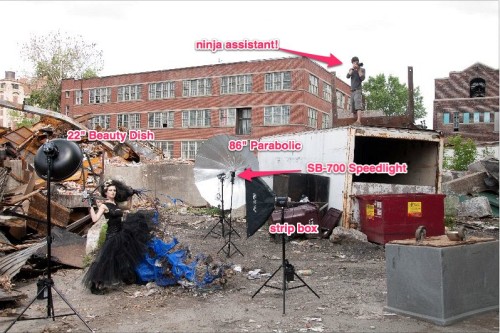 In this shot we used the 22” Beauty dish as a key for the face once again (no grid) as well as the strip box for fill on the dress. Reason I decided on using a strip over the umbrella is that I wanted to minimize the reflective plastic on the garbage as well as add direction to enhance texture. The 86” parabolic in the back just served to help define the edges of the garbage wires against the busy background while the SB-700 just provided that touch of fill in the hair!

Post-production was really about cleaning up and getting rid of things that were too “dirty” and distracting in the photographs. A bit of texturing using a High Pass filter for the dress but besides that it was nothing more than clone, heal and curves. A little bit of smoke textures in the front from time to time add back to the mystery for the shot… but besides that…nothing quite fancy! My weapons of choice are Lightroom 3 (Amazon, B&H) and Photoshop CS5 (Amazon, B&H). 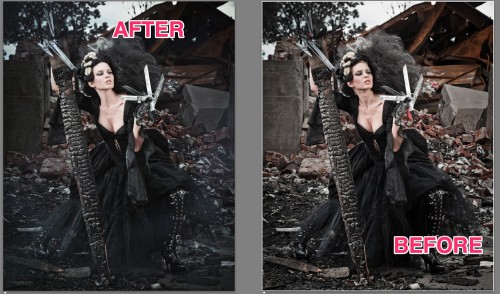 Q: Anything else you feel is important to know when planning such a session?

Choose the right team, be prepared to improvise and have fun.