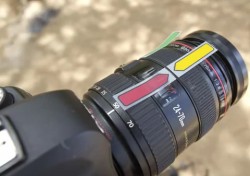 If you shoot any dSLR video, you probably already know that some scenes reacquire shifting focus between several planes. This is a great way to tell a story.

For example, think about a shot where you see a person eating at the front of the frame, then, the focus changes and you see a sign that says “Dont feed the monkeys” or “No people allowed behind this line” or any other thing that adds to the story.

Here is the thing, though, it is not trivial to shift the focus between those two planes without a focus rack or a follow focus. Those usually come with a marking wheel where you can mark each plane of focus and easily return to it while shooting. That’s the up side, there are about 600 downsides if you are not shooting video regularly.

Michael The Mentor came up with a poorman’s solution to focus racking using arrow post its.

P.S. If, by any chance, the cook store is closer than office Depot, consider using a Twist Jar Opener instead.

dSLR Video Rack Focus With Post It Flags via fstoppers.

Save Precious Studio Space With This Strip Light Rack

By Popular Demand: Blood, Hands, Notes And A Gift Card

« Mrs Scissorhands – Shoot Anatomy: Q&A With Benjamin Von Wong
Build A Motorized Slider With A Pen (And A Bunch Of Other Stuff) »