Armand Dijcks posted a pretty interesting method for doing Hyper Lapses over on the Preston Kanak blog. While usually we see hyper lapses made with hundreds of photos (roughly 24 per second) held by a tripod, this one is a bit different and manages to span full 11 seconds using only 7 frames. 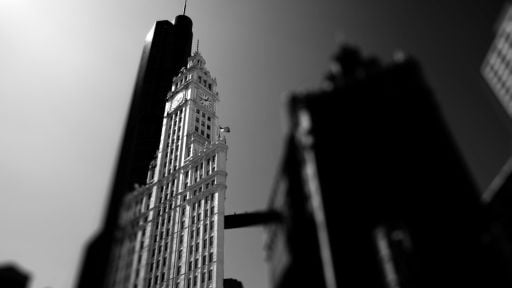 While Armand’s original intention was to create a hand held Hyperlapse of the historic Wrigley building, sitting at the “editing table” he discovered that the movie was way too unstable to make for decent footage.

Instead he opted for the optical flow filter in final cut pro forcing the software to extrapolate 50 “virtual” frames for each real frame. The results are unbelievably smooth. And while some crazy morphing took away from the video, Armand discovered that applying some Tilt-Shift blur on the original photos reduces the morphing to a minimum.

Here is how Armand explains it:

“After stringing [the photos] together into an ultra-short hyper lapse (at 30fps this wasn’t even a quarter of a second of footage), I slowed the resulting clip down to 2% speed in Final Cut Pro, using the “optical flow” setting. Normally used for slowing regular footage down to create slow-motion, optical flow interpolates between the existing frames to create new ones. In this case, since I went from 100% speed to 2%, the algorithm has to make up 50 frames between each pair of existing frames….

…[The morphing] happened mostly on the left and right side of the frame, since that’s where the individual images were most different from each other. The solution was to apply a tilt-shift blur to the initial 7 image sequence, blurring the left and right side of the frame. The blur makes those areas much more uniform. The software has a much easier time interpolating soft, blurry areas than areas with lots of detail. The central part on the other hand stays relatively consistent throughout the 7 frames, so the optical flow algorithm does quite a good job there

What do you think about this footage? Happy accident? I think it definitely deserves the name Armand dubbed for it – MorphLapse. I am sure we’ll start seeing more of those pretty soon.

« Facebook Photo Shows Mischievous Moment – Wife Fired, Husband Only Told Off
Are You Giving Each Shoot The Best It Can Get? (Like £3,000,000 Of Cars) »